Can someone tell me how it is already June 23rd?  Almost through June and almost half way through 2021.  Whoosh!  It goes by so fast.

Meanwhile, today is Wednesday which means I am linking up with Kat and friends to talk knitting/making and reading.  I do have one finish to share.  This lavender (LOVE this color) dishcloth - just a plain one - was finished before we left on vacation.  It's already been in use and needs to be washed. 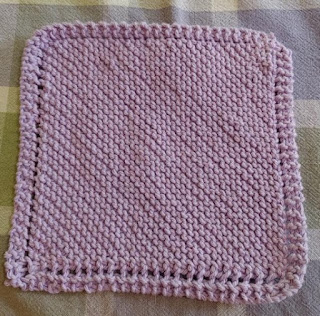 The only knitting accomplished during vacation was the ribbing on the cuff of a new sock.  Since then I've managed to knit a bit more on it. 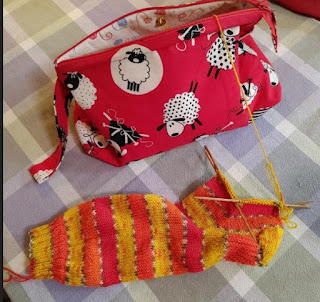 I've named this sock Fuego because it reminds me of fire.  The yarn is Trekking XXL (75% wool and 25% nylon), color 674 - Orange-Yellow (how clever - lol).  I've used this yarn previously and it always knits up nicely and wears well.  I debated doing a "pattern", but decided the self striping of the yarn was enough and that a pattern probably wouldn't show that well.  There are 15 rows of 2x2 ribbing and then plain knitting for the leg (70 rows before the heel flap).  I'm using size 2 needles.

Damon and Peggy, after seeing me knit on this, have both said they would love socks for Christmas.  I promptly got out a tape measure and got their sizes.  (1" difference between Damon's right and left foot!!)  After this pair I will pick out some yarn to make their socks.

My reading has mostly consisted of rather light stuff.  Another book by William Kent Krueger in the Cork O'Connor series (Boundary Waters) which I enjoyed.  Fletch and I finished reading The Good, Good Pig after dinner.  I had read this years ago when it first came out and enjoyed it the second time around.  Not sure what is up next for us.  We tried one of the Maigret books by Georges Simenon, but decided it was better read alone...will need to find something for after dinner tonight!

We are now at two strikes trying to go to a concert in the park with Colin & Mailing.  After a number of very sunny and warm days, it rained most of yesterday (though it cleared by around 5 p.m.) and the concert was cancelled - or rather postponed until a date in August.  We still went over to their house for dinner which was a lovely charcuterie board with meats, olives, tomatoes, pickles, some rosemary almonds and crackers (no cheese as the kids don't do dairy).  We brought over some brownies I had made and they opened some wine.  Talbot pretty much stayed in the sunroom curled up on a chair or on the cat tree.  Marcel was a pest, but finally secluded himself under a chair - lol. 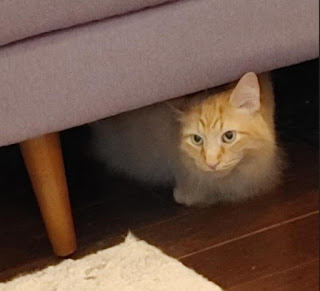 Such a handsome boy.  I wonder how those cats will take to Austin...

It was chilly enough that we put on jackets or sweatshirts and then sat around a fire in the pit after dinner and watched the sky change colors.  Lots of pretty clouds and a couple of bats flying around.  We were home by 9:45 which was good for me as I was tired.  The past two nights my sleep has been broken by foxes barking/screaming in our woods.  An eerie sound and I often have trouble getting back to sleep after hearing them.

Today I am going to the office.  It should be a brief visit (none of my bosses will be in) and I plan to be home before lunch.  Now it's time to dry my hair (my head is getting cold!), pour some more coffee and wake Fletch.  Wishing you all a great day - enjoy!