Nancy over at Wyoming Breezes has a great idea for ushering in 2017.  I'm not one to make New Year's Resolutions...they just annoy me.  But Goals and Possibilities?  Love the idea.  So, for the record, here are mine: 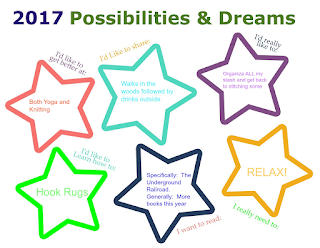 I actually could come up with a bunch for each category, but we'll see how I do with these.


It's 10:30 a.m. here and I am hoping to shortly wrap up my last day of work this week.  I need to stop and buy wine on my way home and then I've got bathrooms to clean, fresh sheets to put on the bed for my brother and sister-in-law, and (hopefully) some knitting time.  I may or may not go to yoga tonight...depends on how much I get done this afternoon.

Email ThisBlogThis!Share to TwitterShare to FacebookShare to Pinterest
Labels: 2017

My best laid plans for going to yoga Christmas Eve morning were thwarted!  I did go – arriving just before 8:30 a.m., but my car was the only one in the parking lot.  Bummer.  I know the teacher the previous Monday evening had said she would be holding class Saturday morning, but there must have been a change in plans.  Usually I get an e-mail when a class is cancelled.  Oh well, I had to run out anyway to get money at the bank and pick up milk.

Now it is sort of a slow return to normal…well, not really.  I’m back at work today but only for a few hours.  Same thing tomorrow and then I’m off Thursday, Friday and Monday.

Catching up on blogs, sounds like everyone had a really nice holiday.  Ours was very nice.  Fletch and I went to church Christmas Eve.  We used to go every year with my parents and then just my Dad after my Mom passed away.  But, since my Dad passed away I just haven’t felt like going until now.  We did not go to the church we always went to, instead we went to a different one where we know the minister.  He and his family were very close to my Dad (in fact he “did” the memorial services for both my parents).  It was really nice to see him and his family again.  When we got home we poured some drinks, opened some stocking gifts and then watched an episode of The Crown (really enjoying it).

Christmas morning we were up early.  I was surprised with a bow (as in archery) of my own!!  I enjoyed archery a lot when I was in school and early this year Fletch bought himself a bow.  I mentioned that I would like to take up archery again, so he surprised me with a gorgeous bow.  I still need to get a glove and arm guard (or whatever that is called) before I can use it.

We had hot cross buns and mimosas at our son’s around 11, opened gifts and then we all (Mailing’s family was there as well) took a long (~ 4 miles) hike around Lake Nockamixon.  Despite the warmish temperature (upper 40’s), we did see some snow on the ground and parts of the lake were frozen.  It felt so good to get outside and move, but I must be really out of shape, because I was exhausted when we finally got back to Colin & Mailing’s place.

We lounged around the rest of the afternoon…some napping, some watching TV, others reading.  Mailing fixed dinner:  Beef Wellington (but with a mushroom pate rather than liver pate), roasted potatoes and green beans.  Everything was delicious.  Dessert just about did me in:  she had made a very rich, dense, chocolate cake.  It was so good, but so, so, so rich.  One bite would have been enough…but of course I had more than a bite.

I’m still knitting Christmas socks (and have one more pair to go – yikes!!), but progress is being made with all the time I’m enjoying at home.  My brother and sister-in-law will be stopping by Thursday before they head back to Pittsburgh on Friday.  Fletch and I have already decided we are going out to dinner that night (I don’t want to spend all day in the kitchen, plus they both have various diet restrictions), so it should be a relaxing time.

What are you doing New Year’s Eve?  We will be home.  Years and years (as in decades) ago Fletch and I used to go into Philadelphia for New Year’s Eve (a friend who lived on South Street threw a fabulous party each year), but the drive in and out of the city is horrible and there are so many crazies on the road…we’d rather just stay at home.  I will TRY to stay up until midnight (I’m not always successful – lol).

Wherever you are and however you celebrate (or don’t), I wish you a Happy and Peaceful New Year!
Posted by Vera at 9:49 AM 10 comments:


No pictures today, just a hurried post.  Our work Christmas luncheon was fabulous yesterday.  It started with appetizers in the lobby of our building - mostly sushi, shrimp, crab and lobster cocktails.  Yummy.  For the main course there were:  rack of lamb, prime rib, Chilean Sea Bass, scallops and then salads, veggies, etc.  And a dessert table filled with delicious, but evil, goodies!!


As I mentioned, my company donates heavily to the Make a Wish organization each year.  We do this in honor of our clients (and instead of sending them gifts which many of them are prohibited from accepting).  This year Piper, one of the recipients of our donation, and her Mom came to our celebration.  What a story!  With no warning Piper went into complete kidney failure just after her 1st birthday.  She ended up on dialysis and then having a kidney transplant (from her Dad).  She is now 3 and just the cutest ever.  She was extremely shy (there were around 100 or so of us in the room), but she opened up a bit after Santa (our CFO) came in.  She sat on his lap and he had some gifts for her.  It was really a wonderful time and I don't think there was a dry eye in the room after listening to Piper's story.


We had a bunch of raffles and prizes, etc.  Each year it seems to get a bit more and more.  But it is a lot of fun.  We all received the 2016 Swarovski Snowflake Ornament (we have been given these each year since 2002) and a gift check.  Our CEO announced that in addition to having Friday and Monday off, we are closing at Noon on Thursday.  Woo-Hoo!


I tried to behave myself and not eat too much...but I was still pretty full when I went to yoga last night.  Luckily the scale showed a pound light this morning (I'm not even going to ask how that happened!!).


Well, here in Eastern PA we seem (once again) to be on a roller coaster ride with our weather.  We woke up Saturday to icy cars and trees coated in a glaze.  The temps stayed right around 32 all day long.  Today, Sunday, we woke up and it was in the 50's!  Now the temp is dropping and tomorrow's high is only forecast to be 33.  It actually felt like Spring earlier today, and now we are back to feeling the bone-chilling cold.


We stayed in all day Saturday.  I didn't want to mess with the roads and I actually got a lot accomplished.  All gifts to be shipped are wrapped and boxes are in my car - I will ship from work tomorrow.  YAY!!


Finally I put out a few Christmas things.  I've pared way back from what we used to do when our son was little.  Back in the day there was "stuff" all over the house.  Now, our tree is in the living room and I have a few choice things on our buffet in the kitchen: 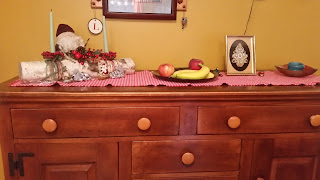 My Mom always had a birch log with candles in it on our dining room table.  I've continued that tradition, but keep it on the buffet.  The log is one we found in the woods in Vermont years ago.  The framed tree on the right is what I call my "jewel tree."  Fletcher's Mom made this for us shortly after we were married and I love it.  Here's a better picture of it: 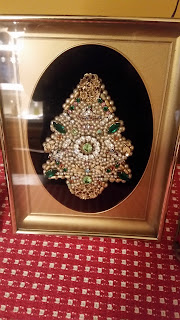 Sorry for the glare -- difficult to take pictures on a grey day.

Finally, some cookies were baked!!  Last night I made oatmeal raisin and tonight I made chocolate chip -- both at the top of Fletcher's list.  I'll probably make one or two other kinds this week and then call it quits - lol.

Tomorrow is our Christmas luncheon at work.  Each year my company makes a donation to the Make a Wish Foundation in honor of our clients.  This year we will be having one of the children join us for our celebration.  I'm sure it will be an emotional time.

And then yoga class tomorrow night.  So far I've managed to not stress and just be relaxed about everything and it's a wonderful feeling.  I hope you all are enjoying the season as well.

Happy Friday Everyone!  Whew...the weekend is almost here (just a couple more hours at the office).
Weather:
What a roller coaster.


Good news:  I wrapped some last night and shipped some this morning.  I can easily get the other items to be shipped wrapped over the weekend and will ship Monday.  In time.  Whew!


A Friday funny for you.  Enjoy the weekend my friends.