The weekend is winding down.  It has been so nice (really, what weekend isn't??).  I got an awful lot accomplished on Friday, leaving work by 1:30.  Before dinner both bathrooms had been scrubbed, rugs and towels washed and the kitchen floor scrubbed.


Saturday morning dawned so beautiful.  Cooler and no humidity.  I did not venture out to the seafood market - I had called on Friday and learned they did not have bluefish.  Poor Fletch.  Instead we had lobster, corn on the cob and green beans.  A better dinner than bluefish in my opinion.


Saturday afternoon I decided to wind yarn in an attempt to pull something together to take to Hilton Head.  First up was the Manos del Uruguay yarn I bought the other week...the yarn that reminded me of river rocks.  The yarn broke near the end of winding it.  Disappointment.  But salvageable.  Just annoying.  BUT, I realized the yarn is more like lace weight than sock weight and would not work for the shawl (Shh! Wrap) that I was hoping to cast on.  Next up I decided to cake up the Mad Tosh sock yarn I had bought a few weeks back (Electric Rainbow).  This is what resulted: 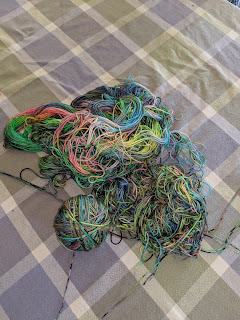 Yup - Yarn Barf!  Oy vey!  It's better than this now, but I am not quite finished with this mess (and it probably won't be finished until I come back from HH).


Saturday night we finished watching "Ordeal by Innocence" on Amazon Prime - very good!  If you have not watched, we highly recommend it.  Tonight I think we will watch the first episode of Loch Ness on Netflix (waiting impatiently for the 5th season of Shetland on Netflix...hoping this fills the bill for a bit).


I started reading "Ape House" by Sara Gruen (of Water for Elephants fame) and so far I am really liking it (about 1/4 of the way into it).  And tonight after dinner Fletch and I finished reading "Mornings on Horseback" by David McCullough about Teddy Roosevelt's childhood and early foray into politics.  We both enjoyed this read immensely and highly recommend.


Oh!  I was a bit domestic today.  After breakfast I set about chopping up tomatoes, peppers (bell and hot), onions and making home-made ketchup.  This batch was a bit runnier (more juice/water in the tomatoes), but it was good to put the volunteer tomatoes to use. 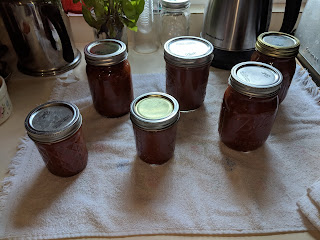 This stuff is addictive:  has cinnamon, nutmeg, allspice, mace and apple cider vinegar in it.


Well, I'm packed and boarding passes are printed.  For once I've packed reasonably and am just taking a carry-on bag.  I have a tote that my kindle, knitting chargers, etc. will fit in easily.  The past few nights I've been dreaming of alligators (I'm sure you've heard of the woman who was killed on Hilton Head last week by an alligator...I will not be walking a dog...but still.....)


A crisp morning here (58 according to my phone; 62 by the patio thermometer) - very refreshing.  I am thankful the weekend is here.  I have a number of things I want/need to accomplish, but believe it is all manageable.


Colin was over for dinner last night (grilled hot & sweet sausage, home-made sweet potato fries, sautéed yellow squash, onions, peppers and mushrooms) and the night was so pleasant we enjoyed a fire around 8 p.m.  It was lovely.  Before dinner Colin went out to the garden to see if he could dig a couple of sweet potatoes.  These are larger than any Fletch has ever grown! 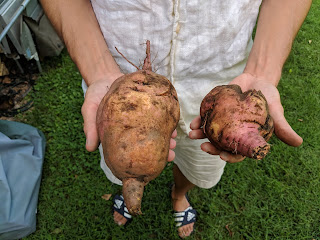 I hope they are not too tough!


Last night I managed to finish What She Ate which was just ok.  Interesting, but not compelling.  Six different women (including Eleanor Roosevelt, Eva Braun, Helen Gurly Brown [!]) and their relationship (or lack of) with food.


Besides the "normal" chores of the weekend, I plan to get to Hill's Seafood Market.  Fletch loves bluefish (me?  Not so much) and it has not been available in our grocery stores.  Hoping to find some to cook up for him.  Hill's is also the one place I know I can get crawfish meat (cleaned) and I've been in the mood for some crawfish etouffee.  Sunday I'll need to pack for Hilton Head (hopefully including a yarny project of interest!).


Our weather is supposed to be fairly pleasant through the weekend...then soaring into the 90's again by Monday.  I have a car picking me up at 6:30 a.m. for my flight Monday morning, so I will miss Philly's HHH weather - but I'm sure it will be HOT on Hilton Head as well.


Whatever your plans - enjoy the weekend!


Nary a picture to show you on this unraveled Wednesday.  I don't know whether I'm experiencing that "back to school" feeling (though, admittedly it has been decades since I've gone back to school), or end of summer blahs (I am so, so ready for Fall)...whatever the reason I have been experiencing more than just a bit of ennui for a couple of weeks.


I'm bored with the Juniper Top (though I did manage to knit 2 rows on it last night).  The dragonfly socks went into time out the other day and I haven't had the interest to look at them.  I can't find a shawl pattern I really want to make to use that new yarn I just got (840 yards - fingering - help me with suggestions...please!).  I looked through a book on shawls that I have and nothing grabbed me.  I went through my patterns and nothing caught my eye.  I'm thinking I might like to do a rectangular one this time rather than a triangular shape.


I've been waiting and waiting for The Weight of Ink to come through on Overdrive.  It finally did and I just cannot get into it.  At all!


On a positive note, Colin is grilling hot and bbq wings for us tonight.  I will make a salad of tomatoes, onions and cukes and we have left over cornbread from the other night.


Oh, I finally managed to have a slice of the peach pie!  I thought it was...ok...not wonderful, not great, and apparently not exactly what I wanted.  Ennui persists....


Mid-day today I will be helping to fill up backpacks for school children.  We are donating a bunch to local groups and all the supplies came in from Amazon last week:  scissors, markers, crayons, glue sticks, notebooks, pencil cases, etc.  That should be fun.


I hope everyone's week is going well and that you all are a tad bit more inspired than I am this week!
Posted by Vera at 9:47 AM 16 comments:

Back At It On Monday


It was a pretty mucky (humid) weekend, but a fun one!  Many of you have already seen Dee's Blog and know that we met up for some fun on Saturday.  First of all, her new house is just wonderful!  I absolutely love it and one of the best things is that it is only about 35 minutes from my house!!


We set off and ended up in our old stomping grounds (Abington, Jenkintown, Glenside, North Hills area for anyone familiar).  So ironic that we grew up only miles from each other and yet only met (for real) last Fall when she and Steve were moving up from FL.  We went to a (new to me) yarn shop in Jenkintown.  Dee's enhancement is over on her blog.  I was rather restrained.  This is what I came home with: 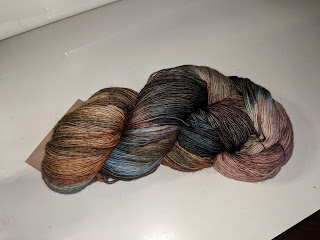 Oh my gosh, the colors in this yarn are just so gorgeous.  It reminds me of some of the river rocks I used to find in the West River (across the street from my Grandparent's home in Vermont).  It is Manos Del Uruguay and the color is "Nostalgia."  It is 100% superwash wool and is 814 yards!  I'm thinking a nice, big shawl for the Fall.


From there we headed to Union Jacks a great pub in the North Hills area which did not disappoint.  After that we ended up in a coffee shop in Glenside to sip and knit.  I managed to get two rows done on the Juniper Top sweater, but I'm getting pretty bored with it.....


Sunday was a nice relaxing day for me (including a 2 hour nap in the afternoon!!).  We did some grocery shopping and I did a little laundry.  I found a container of home-made chicken soup in the freezer and since it was much milder, decided that would be dinner.  I baked up some cornbread to go with the soup. 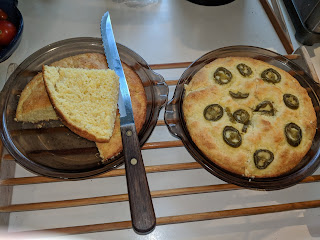 I usually bake it in two small pie plates...one with jalapenos (for moi) and one without (for Fletch).


Since I am getting bored with the sweater, I pulled out the green dragonfly socks to work on.  Oy vey!  It seems as though every few rows I was somehow managing to drop a stitch.  I'd be knitting along happily and look down to see a hole!  I almost ripped the whole thing out last night, but decided to just put it away and look at it again (maybe tonight?)...thinking I managed to pick everything up ok and hoping it does not look too awful.


I probably should pick a new project to take to Hilton Head since the socks and the sweater are just annoying me...lol.


Still quite grey here, but thankfully much less humid.  I'm expecting a much easier week (at least the first few days) - one boss is in Charlotte, one is in Charleston and the third is moving his son into an apartment for his junior year in college.  Hoping to get out at lunchtime to run a few errands.


TGIF!!!  Yesterday's events at work were fun - the kids all had a great time.  So much for them to do!!  Spin art for Tee shirts, photo booths, games, movies and, of course, Food!  The office ended up closing at 3, but I bolted around 2:30.  It was a very noisy day and I had a major headache.


Col was over for dinner again last night and grilled delicious burgers.  He also made a wonderful cole slaw adding some of the carnival peppers from the garden.  I was so full from those that I couldn't eat the corn I had picked up on the way home and I still have NOT had a piece of the pie!  Colin had some and took most of it home to share with Mailing.  There is one piece left which I am hoping to split with Fletch tonight.


Fletch is growing sweet potatoes again this year.  In the past, they have tended to be very small - almost like carrots.  But this year? 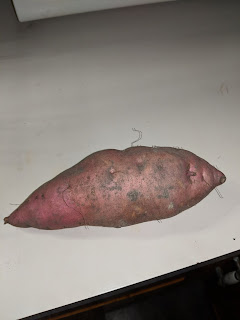 YAY!!  A nice sized sweet potato (which we may split tonight).


Work will be busy today.  I have a conference call in 20 minutes and another one at 10.  As usual, I'm hoping to get out of here by Noon or 1 at the latest.  I have a number of things I'd like to get done this afternoon (chore-wise) as tomorrow is a play day with Dee!!


Last, in honor of Friday Felines, here is a shot that Colin capture of Tyg during his yoga practice:

So relaxed!  If only my spine would bend like that - lol.


Wishing you all a wonderful weekend!!