It is grey here this a.m. and Tyg (whom I let out at 3:30 this a.m.) came in a bit on the wet side when I came downstairs this morning to make coffee.  It was one of those nights:  I woke at 2-ish hearing a fox bark out back.  I wondered if Tyg was out or in.  I got up to pee and also to turn on the ceiling fan.  When I came out of the bathroom, Tyg was on the landing at the top of the stairs.  He eventually came into the bedroom and jumped up on the bed.  Settled down for an hour or so, but by 3:30 he was jonesing to go outside.  Fortunately I got back to sleep after that.

Work is still busy and I have numerous reports to run today and spreadsheets to send out.  But first, a little personal time on the laptop!

Our Siberian (or Flag) Iris are in full bloom in our bog area. 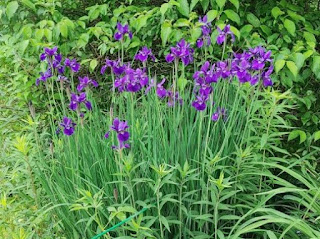 Aren't they pretty?  We also have some vibrantly yellow ones, but they are shorter.  I cut a few of each and have them in a vase on the kitchen table.  We've been smelling a lot of honeysuckle when we sit on the patio - there seems to be a lot of it this year.

Also, more lemon blossoms have opened on our lemon tree and they are just so amazingly fragrant.  So sweet.  The two little lemons are slowly growing (emphasis on slowly).  I wonder if there will be another one from this recent clump of flowers.

Anyway, on to food since it's Thursday.  Over the weekend, I made one of our favorite dinners:  Crab Quiche.  I make this every New Year's Eve (since we stopped going out).  The quiche, a small salad, and glasses of champagne go together so well.  The recipe is from a Philadelphia Orchestra cookbook that I got years and years (as in decades) ago. 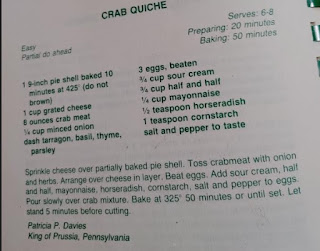 I like the way the book tells who submitted the recipe and where they are from.  There are numerous recipes in the book from famous Philadelphia restaurants as well.

You can use either a store bought pie crust or make your own.  Usually I use Jarlsburg cheese or another Swiss cheese.  On Saturday I used a sharp cheddar and it was delicious.  I always put in a pound of crab meat rather than just 8 oz.  Instead of 3/4 Cup of half & half I use about 1/4 Cup of milk (in our case, fat free) and it turns out fine.  The horseradish is important as is the sour cream and mayonnaise.  This time I also added some kale to the dish as well as garlic scapes, onions and all the herbs. 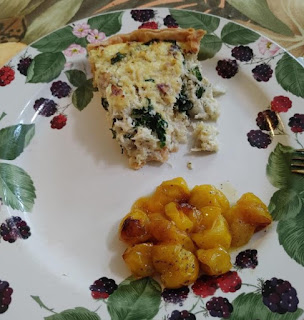 So good!!  We had it with roasted cherry tomatoes (another great and easy dish - take a container of cherry tomatoes, drizzle with EVOO and either honey or Agave syrup.  Plop in a pan (cover with aluminum foil first) and bake with whatever you are cooking for dinner.  The tomatoes start to burst and are just so delicious!!).

Mailing is out with work-mates this evening, so Colin is coming for dinner after he gets his second jab this afternoon.  I was wondering if he could even get it, assuming he was on some kind of antibiotic after the deer tick bite, but he said he got a one-time, two pill preventative for Lyme Disease which he took last Friday.  He is good to get his final vaccination this afternoon.  A new shrimp dish is on the menu!

Time to pour another cup of coffee, wake Fletch up and start in on my reports.  First though I will sneak in a few blogs.  Have a good Thursday!!