Another socked-in grey day here.  I believe we are supposed to have rain most of the day.  Yesterday was fairly busy for me, but I was able to sneak out for an hour and a half for a nice walk on the tow path.  No blue herons were seen and, fortunately, no snakes either.  Just some sleeping ducks. 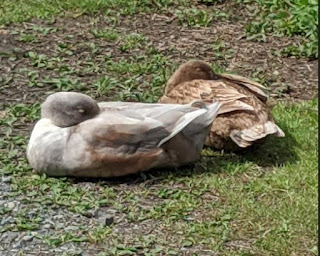 There were some other ducks in the water and also noisy geese.  A few kayakers were out and there was minimal foot traffic on the trail.  I even wore a bandana! 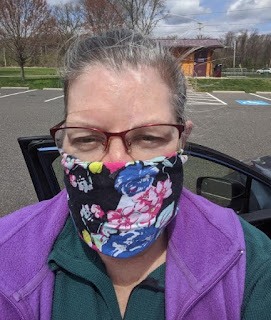 At first I did feel a little silly/foolish and occasionally my glasses steamed up a bit, but I kept it on the entire time.  I only saw two other people with masks on - two men who were roughly my age, give or take, and they just had the masks around their necks - not covering their mouth and nose at all.  And the point would be?????

I also did some more archery in the afternoon, but nothing worth showing (i.e., no bulls eyes - lol).  It's probably good for me to have a little break from that today.  I can feel it across my upper back and in my upper arms (which need it anyway). 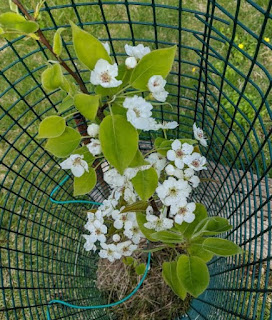 And I'm afraid my lilac buds were more leaves than flower buds.  There are a few deep purple showing, but not much.  Time will tell.  The mint is coming up nicely (ha!  so invasive...) so soon it will be mojito time!  I have some fresh pineapple in the frig - maybe pineapple mojitos?

Meanwhile, Fletch has been busy.  He has been putting cedar shake shingles on the back side of our house that is under the patio roof.  He finished one section yesterday and re-installed some of the antique tools he has against that backdrop. 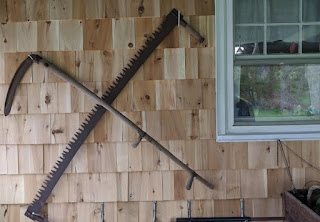 It looks so nice!  The other section will require a bit of juggling (he has SO MUCH STUFF on the patio).  He also has two guideboats hanging from the patio roof that are up against the house.  All in good time....

I only managed to knit 4-5 rows on the sock yesterday.  Hoping for more today and that will most likely happen since it will be raining.  I've got several financial reports to run this morning and after that I *think* I may be clear for a bit.

Wishing you all a great day!
Posted by Vera at 7:09 AM