I hope this Monday morning finds you all doing well.  Thanks for all your comments on the Canary Blanket.  It is finished (wrapped up the whole thing on Friday - even weaving in the ends!!). 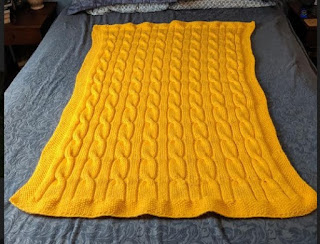 The majority rules and I did not block it (I wsn't going to anyway...jut wanted to know what people thought).  The grey, overcast weather we've been having would mean a month or two for it to dry!  LOL.  And, as several people commented, I think it will be just fine and will stretch out a bit with use.  It is folded up and in a bag for Colin along with some other things I have for him.

Saturday was sort of a blah day for me.  It wasn't nice enough to be outside (too raw and still windy).  I finally settled down and went through my Dad's things that have been sitting in my home office since he passed away 6.5 years ago!  Prior to now I just didn't want to deal with it.  Now I needed to since I'm actually using the office.  Everything has been sorted and I have piles for my brothers and a huge pile of things to be shredded (when I can get back to the office).  It feels good to have that chore out of the way, but I was exhausted that evening.

Sunday dawned much nicer.  First up there was Steve the Beav coming closer to the house! 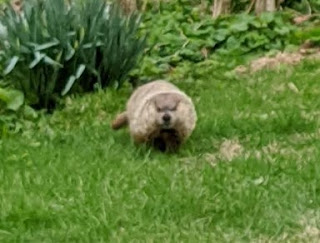 As Colin says, What a Beast!!  After breakfast I did some chores - cleaning bathrooms, laundry, etc. and did my workout.  I decided to head over to the towpath to walk.  It was a great time to go as there were not that many people out yet.  There were tons of turtles sunning. 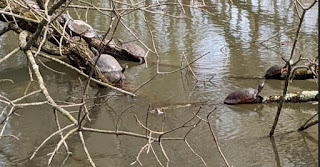 And ducks wandering about. 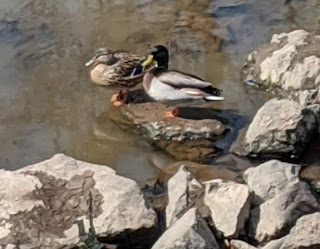 About 3/4 of the way back I passed a girl with a schnauzer and thank God I looked down.  Because right there was the evil serpent! 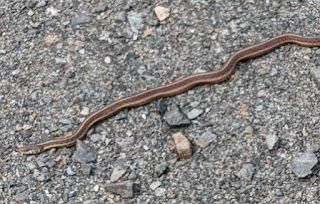 I had just missed stepping on it.  My heart was racing after that - lol.  I know it is just a garter snake, but to me, a snake is a snake and is EVIL!!!

Later in the day I did some more archery. 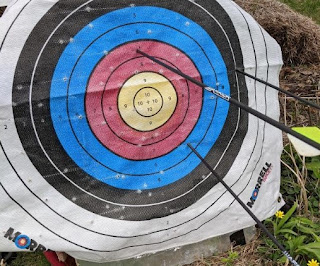 Still no bulls eye and not that many arrows even hit the target this time!

I also pulled some weeds and an invasive vine that is wrapping itself around my lilac.  Boy that was a lot of work!

That pretty much sums up my weekend.  I worked some on the lilac/purple sock but will save that for another post.

How was your weekend?
Posted by Vera at 7:30 AM