If you were ever waiting for a rainy day, today is your day!  Geeze, I woke at 2 a.m. to howling/whistling wind and a downpour where the rain was hitting the house on all sides!  I got up and went into the bathroom and found Tyg curled up on one of the rugs.  Then, of course, he wanted to go downstairs, have some water and then (very surprisingly) he went outside!  It is still raining like crazy and I think is supposed to all day.  I'm glad I don't have to drive into work!

So, how was your weekend?  How was your Easter?  Definitely a different kind of Easter weekend.  I actually worked on Friday.  Good Friday is a holiday for my company, but I had a conference call and some reports to get out.  I shut down by 2 p.m. though which was nice.  And knitting that afternoon I was able to finish the first lavender sock. 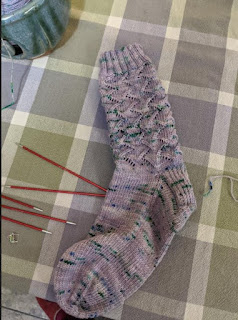 I also started sock #2 that evening and this is where it is at presently: 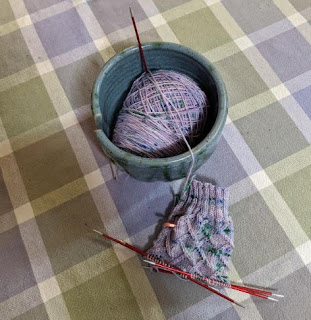 Saturday I left the house by 8 a.m. to go grocery shopping.  We didn't need all that much - primarily fresh produce, wine and cat food!  It took FOREVER!  The stores now have directional arrows at both ends of the aisles and one store even had an employee directing traffic to the check-out...you were not allowed to get in line until they told you to.  Also, as of today, they will begin limiting the number of people who are allowed in the store at one time.

No walking or archery on Saturday - it was still too breezy and a little on the chilly side.  We decided to make pizza for dinner. 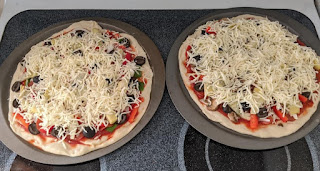 Before going into the oven...and I forgot to take a picture when it came out.  It turned out pretty well, though neither of us really liked the crust (I couldn't get what we usually use and went with a different frozen pizza dough...next time I'll just make my own).  These were loaded though with fresh basil, olives, bell pepper, artichokes, mushrooms, pepperoni.  Yum!

Easter Sunday dawned beautifully.  We had breakfast together and then I decided to get out early for a walk along the canal while Fletch watched Sunday Morning.  My walk started out very pretty, but halfway through I lost the sun!  The trail was pretty empty which was nice - just a couple of runners, a few walkers and a few bikers.  There were no blue herons to be seen, and only a few ducks and turtles were out.  I did, however, find a painted rock along the trail. 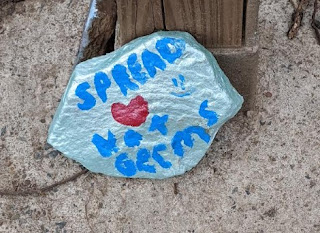 Fletch, in addition to putting up cedar shake shingles on the back side of the house, has started building benches for our picnic table.  The table and (old) benches are some my Dad made for us about 30 years ago!  You can see in the picture that we had to put some wood under the legs of the table as they have been rotting.  The benches too and they had become terribly warped.  I love the way the new bench looks (love the different tones of the wood).  The new ones are made out of cedar and are much lighter than the old ones.  Additionally, these benches fold (the legs fold up so they can be stored flat).  Once the second bench is finished, he will start on the table.  Colin has also asked him to make a set for them! 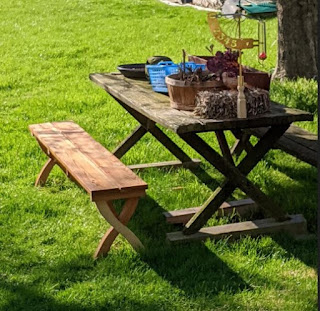 We did end up going over to Colin & Mailing's last night for an outside fire.  We got there around 8 and left before 9:30 as it was starting to rain lightly.  We all kept our distance, but I was happy to drop off the Canary Blanket, some frozen soup that I had made last week and a few other miscellaneous things.  It was wonderful to see them again (finally) and hard not to rush up to hug them.  But we all behaved!

So, that was my weekend.  How was yours?

As I mentioned, it is a very rainy day.  At least it is not snow (my brother in Boulder, CO texted that they got 7" of fresh snow!!).  I'm not sure what the work day holds for me, but I'm hoping for a nap later to make up for being awake at 2 a.m.!  Hope your Monday is a good one!
Posted by Vera at 7:05 AM