Happy Mardi Gras!!  In our house, the masks are up! 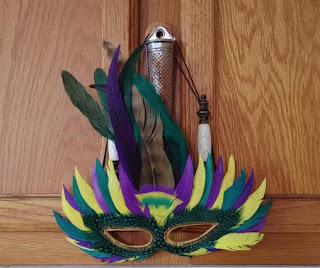 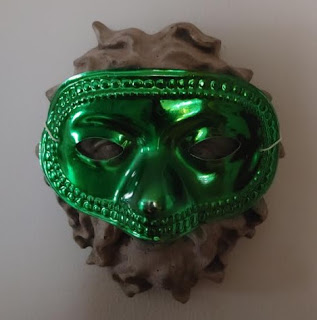 I'm not sure if we will be throwing beads today, but I'm sure there will be a bit of alcohol!!  Have you ever been to NOLA for Mardi Gras?  I went in 1980 with a girlfriend.  At the time one of my brothers was living in New Orleans, so we had a place to stay.  And, oh my!  What a party it was.  I remember needing to go to the bathroom and not being allowed in a bar because I was a female (the bar was gay).  I also remember how everything was so filthy - trash and beer, etc. in the street.  And then, Ash Wednesday we got up early to head to the airport and you would never have known that Mardi Gras had taken place...the streets were spotless - no trash or debris anywhere.  The workers had worked all night to clean up everything.

Meanwhile, it's TNT, or Tiny Needle Tuesday.  A bit of stitching got done in the past week.  Not as much as I had hoped for.  I had planned to finish the center motif, and I got close, but not all the way. 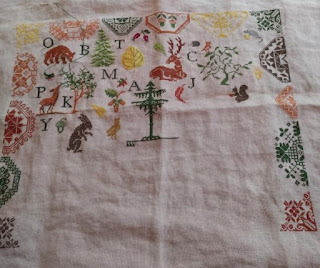 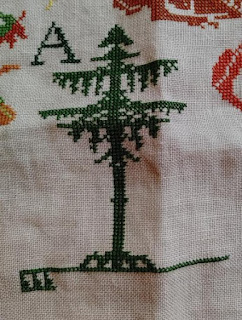 This section - and then some - should be finished by next week.  A little boring to be using the SAME color for the entire image, but once it is complete, it works well.

The cooking - or I should say baking - continued yesterday.  I made Ina Garten's Dark Chocolate Tart which has to be the easiest dessert ever.  Also EXTREMELY rich and delicious! 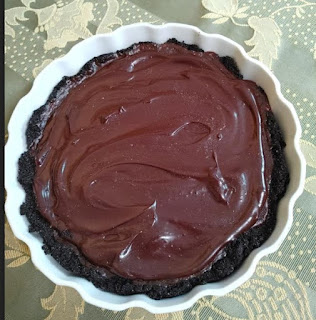 There are a few slivers of this in the frig and the rest has been wrapped and is in the freezer.  Plenty of chocolate for a long time!  My version does have sea salt on the top, but the flakes are so small they don't show up in the picture...but the sea salt with the chocolate = LOVE!!

I've a bit of running around to do today.  The vet was closed yesterday for President's Day, but I left a message...we are sure Tyg has worms (ugh!) and I'd like to pick up the de-worming med today (the kind we have used before is just put on similar to Front Line.  We need some new shower curtain hooks for the downstairs bathroom, so I will most likely stop at Target for those.  I need a ruler (I've looked high and low in the desk and cannot find one) and I'd like to get some sprouts for salads - if Target doesn't have them, I know a grocery store I pass carries them.  Lasagna and a salad are on the menu for tonight.

If you are in the midst of the storm, stay safe.  Our temps actually rose a bit and we had heavy rain during the night.  And that's a wrap for me.  Work was quiet yesterday and I'm hoping for more of the same today.  Wishing you all a wonderful day.