It's a little later than I normally post...the morning kind of got away from me.  But it is Friday and that's a very nice thing.  And my 8:30 a.m. conference call was cancelled.  I still have one at 10 and another at 11, but the sun is out and temps are on the rise again.

It has ended up being a busy week!  I have very limited cabinet space in the kitchen and no pantry at all.  Which is a shame.  Years ago Fletch built shelves for me in the basement and we store canned goods (soups, beans, tomatoes, etc.) down there.  I will also put bags of flour, sugar, corn meal, etc. down there - all secure in tough zip lock bags.  This winter, for the first time ever, mice have gotten into flour and corn meal.  So gross.  Yesterday we took everything off the shelves and Fletch used a shop vac to clean them up, then did some more cleaning.  I bought some plastic bins to store things in, so hopefully everything is mouse-proof now and will stay fresh.  I also discovered a number of canned goods we will never use (things I will say that Fletch bought at the beginning of the pandemic when he feared we might never get to a store again).  I now have two large Trader Joe's bags ready to donate to a food pantry.  That will hopefully happen later this afternoon.  It feels good to have gotten all that stuff organized.  Recently things had just been put on any shelf with no rhyme or reason to placement (I'm not going to name names, but if I had put things away that would not have happened - LOL).

Tyg ended up on the patio roof again the other morning!  I refused to open the window for him - I don't want him getting used to climbing up there and then jumping in a window.  I ended up getting up and going downstairs, putting the coffee on and then opening the patio door and calling for him.  Very soon he had climbed back down and was coming inside.  He had a quick bite to eat and then wanted to go back out!  In and out and in and out.  Enough to make you crazy!

I'm now working the smocking stitch on my Heart Warmer cowl and it is such a fun stitch!  Pictures next week.  And, last night I did cast on using the Northern Lights yarn from Knitpicks for a new pair of socks. 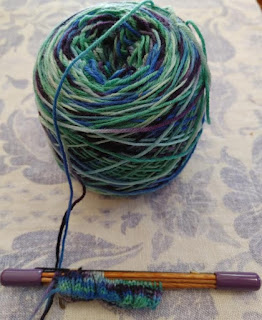 Not much, but a start.  Five rows of 2x2 ribbing are complete.  I usually do 15 rows on the cuff.  I hope to work more on these this weekend and start the pattern I've chosen.

Tomorrow we are heading to Colin & Mailing's for dinner.  They have gone Vegan for Lent, so no meat or dairy in the meal.  I think Colin said he was going to make French Lentil Soup and bake a loaf of bread.  I'm sure it will be yummy.  He also suggested that we come over a little earlier than usual so we can all take a walk in the afternoon, and he told Fletch he may try to shovel a path out to the fire pit in their back yard.  That would be fun.  I had planned to walk yesterday with our warming temps, but the wind was still too much for me.  Even with an earband or hat on I tend to get ear aches when it is windy.

I've started reading Perestroika in Paris by Jane Smiley and am finding it so charming.  Thanks for the recommendation Kym!!

Well, that's a wrap for me.  I need to get another cup of coffee and get ready for my conference call at 10.  Wishing you all a wonderful weekend!  Enjoy!!