How was your weekend?  Mine was pretty full.  I was out and about Saturday morning and geeze it was foggy!  It got progressively worse as the morning wore on.  But, later in the day the sun came out.  Fletch and I headed over to Colin & Mailing's and took a nice 1/2 hour walk in their neighborhood before the sun went down.  There were plenty of folks out walking (everyone keeping their distance, of course) and we passed one house where folks were sitting around a fire in the back yard.  The wood smoke smelled wonderful.

Getting back to the kids' home, we lazed around and watched a few episodes of Whose Line Is It Anyway?  with Drew Carey - hysterical!!  I laughed so hard.  Then we had dinner which (naturally) was delicious.  The kids are vegan right now (Lent) so dinner was vegan.  We had French Lentil Soup that they made and some home made bread (regular, whole wheat and rye flour combination). 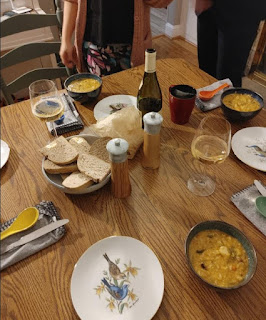 The soup was different than Lentil soup I have made - this version has turnips, onions, carrots, potatoes, rice, spinach.  Very filling and very tasty.  The bread was dense, but so good.  They even had some butter in the frig (left from pre-vegan days) that Fletch could use on the bread!

After dinner Colin got a fire started in their fire pit in the back yard.  Luckily I had brought my wellies over so I could walk through the snow.  It was a gorgeous full moon night for a fire. 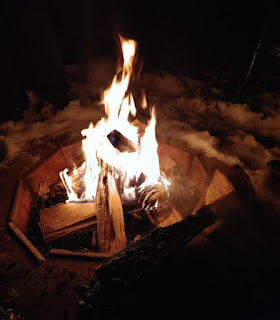 Colin had started to clear snow away from the pit, but then thought better of it.  Better to have some snow than a mucky, muddy mess!

Sunday was a rainy day.  Fletch and I did some grocery shopping, some napping and just general lazing around.  A little (very little) knitting was accomplished, but not a whole lot.

I may not be back to this space till Thursday.  Tomorrow I'm taking a vacation day because my friend Carol (have not seen her in almost a year) is coming up to celebrate Christmas and her birthday.  We've tried to get together several times and each time our plans have fallen through.  I'm really looking forward to seeing her again.  And Wednesday I need to get in to the office, fairly early.  My boss, Kevin, is flying in from Atlanta today and his new VP will be on site for some orientation as well.

I'm hoping today is quiet work-wise as I plan to bake a Blueberry Gateau and also a batch of oatmeal cookies.

Wishing everyone a great start to the week!