Gosh - yesterday was such a beautiful day!  I did manage to get out in the morning for a walk (just over 3 miles) along the River Trail in Valley Forge.  The Schuylkill River goes alongside the trail.  I only saw a few people (either biking or walking) and no wildlife, but I did hear woodpeckers in the woods.  At one point I spotted this hanging over the river: 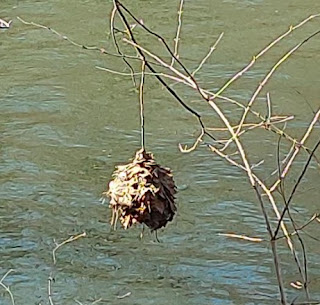 At first glance I thought it was some strange kind of nest, but then I saw lots and lots of them.  It's just clumps of leaves that washed together when the water was high.  But so strange that almost all of them are round in appearance.

Work stayed quiet all day and later in the afternoon I got in some archery for the first time this year! 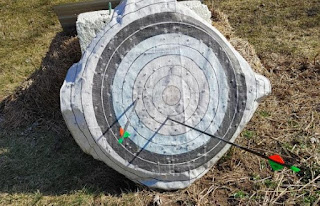 My first two arrows!  I did not continue doing as well...but I shot a total of 25 arrows which I thought was a good start to the season.  Rather than shooting all the arrows at once, I'm shooting 5 and then fetching them.  Since a good portion of them do not hit the target, it's easier for me to stop after 5 and walk up to retrieve them - less likelihood of missing one or just forgetting where one went.  Anyway, it was a lot of fun.  Obviously our target has weathered a bit....

Well, it is Tuesday which means it's time to report on Tiny Needle Progress.  There was a tiny amount of progress this week.  Another motif in the bottom border was stitched.  First a close up and then the overall sampler. 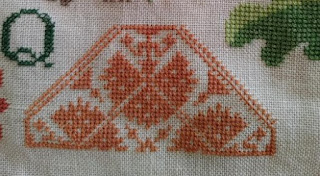 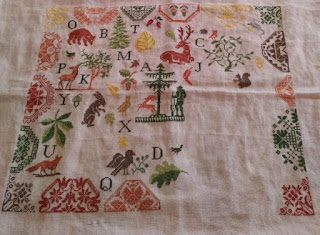 It is coming along.  Just two more motif figures along the bottom edge and I sure do hope it meets up well with the right hand side.  If not...I will fudge...I will not be ripping out - LOL.  There are still some letters to stitch (and I should decide on a color for my initials - I want them to be different than the other letters), also a larger fir tree than the one at the top, a few more leaves and a bunch of creatures.  I'm enjoying seeing this come together and, fortunately, it is still a joy to stitch.

A little later I'll head to the office for a little work and our virtual lunch.  Thanks for the wishes for me to win a prize!  I don't really care - I already received gift cards, a lovely candle (forgot to mention this, but it was in the box with the gift card and golden egg).  Bobby and the company are beyond generous!

One thing I need to work on is planning a meeting for April.  My one boss, Bruce, has decided he is having a meeting for his team in April in Florida.  What???  I told him I would organize it, but I will not be attending.  I have no desire to travel at this time and I think he's nuts to be holding a meeting...but that's my opinion, not his....

Enjoy your day!  Time for me to pour some more coffee and try to wake up.