And Another Week Begins

How are you?  How was your weekend?

I'm sleepy.  That seems to be my mantra more and more, but it's true.  I woke at 2:15 this morning hearing Tyg crying on the patio roof (again).  I came down, opened the door, called to him and a minute or two later he was off the roof and coming in the back door.  I didn't fall back asleep though until after 4 a.m.!  And yesterday, I guess due to the time change, Fletch and I were both walking around like zombies.  Normally changing our clocks doesn't really impact me very much, but this time it has.

Oh well, the weekend was nice.  Saturday when I got up the first thing I did was make Cuban Bread. 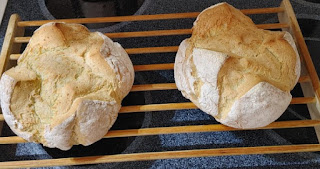 This is a nice, easy bread to make and the house smelled wonderful!  Colin and Mailing came over for dinner and, since they are still vegan for another couple of weeks, dinner was vegan (and delicious!).  I made the enchilada stuffed mushrooms (no picture - I forgot) and a huge bowl of fresh guacamole.  Mailing brought over some roasted potatoes that were delicious.  I never got around to making a dessert, but it turned out to be just as well since we were all stuffed with the main course.  Fletch got a fire going outside in the fire pit and we sat around out back for a few hours just talking and laughing.  Such a nice evening.

Sunday was a blur.  We did a little grocery shopping and that was about it.  I managed to knit a little. 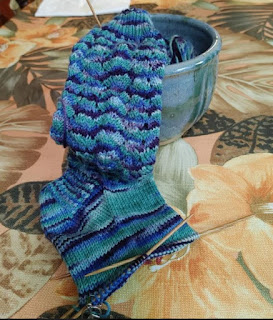 Working my way down the foot of the sock.  It did not fly off the needles as I thought it might, but the heel flap and turn are finished and I'm partway down the foot now.  This yarn looks so different in plain knitting rather than the pattern that is on the leg.  But, no matter, I like the way it is coming together and I think the intended recipient will like these.

So, it's mid-March already!  Wednesday is St. Patrick's Day and Saturday is the first day of Spring!  Our temps have dropped some and the winds have picked up again (March Lion).  I will be working out inside this week rather than walking.  I also think some rain is in our forecast later in the week.  I had thought I'd go to the office today, but now think I will wait until tomorrow.

Wishing you all a great start to the week and hoping for those of you in the path of the Spring snowstorm that you are not getting dumped on too much!  Stay warm!!