It's a foggy one here (outside...today my head is not so foggy).  Rain is coming in and it looks like we will have rain all day.  Hopefully not too heavy - Colin & Mailing are driving down to Richmond, VA after work today.  Mailing has to go down for her job and Colin is going along since he can work from anywhere!  They will wind up with a weekend in DC with some friends.  Fletch and I are on cat feeding duty starting tomorrow morning.

As I said, rain is coming in, so I probably will not walk today.  I didn't yesterday either but I managed to get some more archery in (another 25 arrows shot).  It was such a beautiful day yesterday that we had a summer-like dinner.  Fletch grilled wings (half hot and half BBQ) which were delicious and I made a potato-leek salad to go with.  And we had some roasted cherry tomatoes.  Sigh...I do love to eat!

Before I get into Unraveled Wednesday business, let me briefly tell you about yesterday.  The virtual luncheon was nice.  A lot of folks attended - probably 70 or so logged on, but it went without a hitch.  I did not win any prizes but oh boy! the prizes were very nice ($200 Amazon gift cards, $200 Chef-at-Home cards, Apple Watches, I-Pad minis, Bose ear buds, Yeti coolers, Google Nests, X-Boxes, etc., etc.).  Like I said before, Bobby and the company are beyond generous.  Also learned a few nice things:

All of this was so nice to hear.  I had talked with Bobby previously and he had indicated that this was what he was thinking, but it was nice to hear it announced to everyone!

One other thing:  the Hawks are back!!  Do you remember that last year we had hawks nesting on a light fixture on my office building?  It was so cool to watch the babies grow and finally fledge.  The building and surrounding walkway, etc. were a MESS though - bird poop on the side of the building, on windows, on the walkway, etc.  Property management finally put up a canopy over the entrance!  Anyway, maybe 6-8 weeks ago I had noticed some sticks on the light fixture and then they disappeared.  I figured property management had cleared them out.  Yesterday there were many more sticks on the fixture and the hawk was squawking at me from a nearby tree.  When I got up to my office Bill told me the hawk had buzzed him as he came into the building!  I hope property management lets them be (even if they are a terrible mess).

On to Wednesday business!  Some progress has been made on the 2nd Northern Lights Sock: 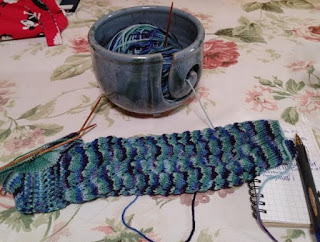 Last night I turned the heel and started down the gusset.  It won't be long now!  I think I've already decided (subject to changing my mind, of course) on the next pair I will make.

Still no more progress on the Guernsey Wrap.  Every time I think I will pick it up and knit on it, something else gets in the way.  Oh well!  No rush, no deadline, and it is a good thing to have projects from which to choose.

On the reading front, I did finish Miss Benson's Beetle and I loved it!  I am now engrossed in Clock Dance by Anne Tyler and am enjoying it.  Anne Tyler is one of those authors for me who I sometimes really like and other times her writing just bores me.  Reviews on Clock Dance are mixed, but I like it so far (roughly half way through it).  I also received notice from the library that a book I had been waiting for came in, so I picked it up yesterday on my way home from the office.  Victorian Gothic is not a genre I typically read, but the reviews of This Book have been good, so I will give it a try.  Have any of you read it?

On this Unraveled Wednesday, I am linking up with Kat to talk making and reading.  Head on over to her space to catch up with her and others.