How are you?  It is still dark here (not even 6 a.m.), but I think it's raining and then it will change to sleet and then snow.  By 11 a.m. it should all be over...hopefully.  Our forecast is for 1-3" of snow.  Colin texted that they could get a wintry mix tonight in Austin!

My day at the office was blissfully short.  I arrived a little before 8 a.m. and before 9 a.m. I had finished what I went in to do!  I hung around a little more, but was home before 10 a.m.  I saw one other person the entire time I was there.  I noticed cars in the parking lot that I recognized, but didn't see anyone else.  My afternoon was filled with chores.  The kitchen floor was finally scrubbed and both bathrooms were also cleaned.  Towels were washed as well as rugs from both bathrooms and the kitchen!  And there was still time for knitting and reading.  A good day.

Last night's dinner was stir fry.  Also known as whatever is in the frig - LOL 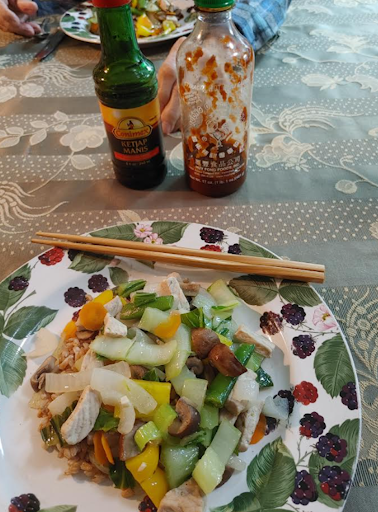 I started with fresh ginger and garlic (both minced) in sesame oil.  Saute that a bit and then I added some pork.  Sometimes we use chicken or shrimp or even beef, but last night it was pork.  I had thawed a couple of pork shops and cut the meat into little strips.  Once that had mostly cooked I threw in the veggies.  (If it had been shrimp, I would have pulled the shrimp out of the pan, but because it was pork, I wanted to be sure it was thoroughly cooked.)  The veggies last night were:  baby bok choy, carrots, pepper, onion, sugar snap peas and mushrooms.  Usually I throw in broccoli, but I knew we were going to have that tonight.  I also typically toss in cashews and I completely forgot them!  We had it over farro and accompanied it with the usual sriracha sauce and our favorite soy sauce - Conimex Ketjap Manis (sweet Indonesian soy sauce).  Yum!  There is even a bit of leftovers for a lunch for Fletch.

Tonight we are having Spicy Cuban Beef over brown rice with steamed broccoli.  I'll save that delicious recipe for another time.

Well, it's Thursday which means time for me to run reports.  I'll be checking out blogs a bit later.  Hope everyone is staying well and having a good week!