It is another chilly one, but at 24 it feels almost balmy (we woke up to 8 one morning over the weekend).  There is a fresh skim of snow on the roof of my car and on the picnic benches, but not enough to do anything about it.

How was your weekend?  Mine was nice.  It involved a lot of little things that added up to just being a comfortable, nice weekend.  Saturday morning (brrr) I got up and ventured out to Starbucks in Kulpsville to meet up with Dee.  It was not busy and we sat in our usual cozy corner chatting up a storm and knitting away on things (socks for me, a blanket for Dee).  Then a weird guy started asking us questions.  He left and came then came back and again was bothering us.  Dee (the braver one) finally told him to leave us alone.  We left shortly after that (I had to get going anyway) and decided that next time we'd meet at a different Starbucks (that guy had been there the previous week as well).

That afternoon, before dinner, I was able to finish Holiday Sock #2. Despite this being a short skein (weighed under 100 grams), I had yarn left over and they did turn out to be pretty matchy-matchy which (for once) pleases me.  I'm glad to have these off the needles (size 1 BTW and the yarn is Cascade Heritage in the colorway:  Holiday [duh]).  I don't have another project in mind per se.  I have a couple of skeins that I have caked up and I may cast on some socks for Fletch (he's been a good boy lately).  I plan to focus mainly on things that are in the works.  Like my French Market Bag or my Guernsey Wrap.  I'll let you know what I pick up!

I have been in the mood for falafel but I do not like deep frying anything.  I found a recipe on line that you bake in the oven rather than frying.  Well, the recipe turned out to be a bit on the moist side...like impossible to roll into balls.  So instead I used my cookie scoop and then sprinkled the sesame seeds on them rather than trying to roll them in the seeds. 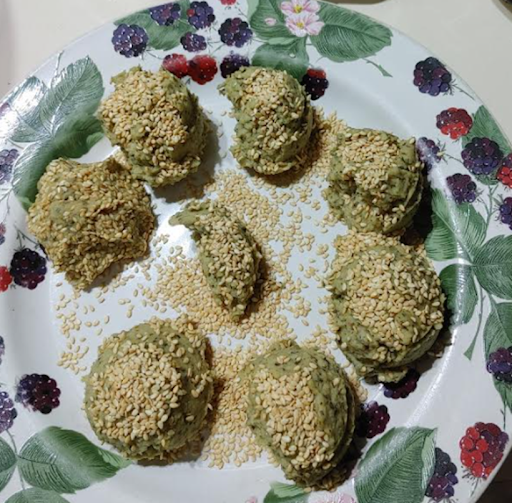 Pretty fugly, but they tasted good even before they were cooked.  Rather than baking them in the oven I decided to use my air fryer.  Though they firmed up a bit, not as much as I had hoped.  Still, the taste was very good and we had them with some cherry tomatoes, cucumber, radishes and garlic naan.  Yum!  Next time I will try a different recipe (or get the recipe Colin & Mailing use from them).  (They look greenish in the picture because there was a lot of mint mixed in with the other stuff.)

Sunday was another chilly day, though not too bad.  Still, it called for wool socks and I decided to not wait till next Christmas to wear my Holiday Socks!! 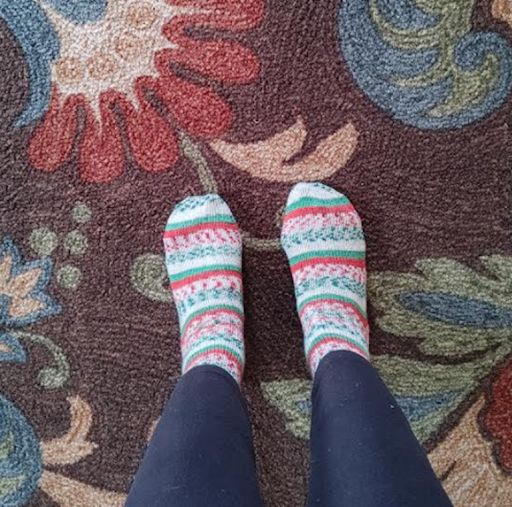 Nice and cozy and I was wearing (of course) my fleece leggings.  We did some grocery shopping (wow have prices sky rocketed and why the shortage on cat food??).  I had a delightful nap and then we fixed nachos for dinner.  I worked a tiny bit on my stitching and we watched "Around the World in 80 Days" and "All Creatures Great and Small."

On the docket for today is to go through some more stuff and add to the donation pile(s).  We did get rid of a ton of stuff on Friday and that felt so good.  I also need to start organizing things for taxes...and call our accountant and book an appointment for that.  I suppose, too, now that the holidays are over I should buckle down and get my shingles shot(s).

Nothing too exciting, but that's fine with me.  Here's to the week ahead - may it be a good one for all of us.