Can you believe it is 50 degrees outside?  Weird, crazy, roller coaster weather again.  My little brother in Boulder, CO was getting high winds yesterday - branches down, patio tables knocked over and glass shattered, patio furniture cushions in the neighbor's yard, etc.  I do hope everyone is safe.

Yesterday was a nice day.  I went to the office and then was home before 10:30!!  And that included a stop at JoAnn's and also the State Store.  I saw a couple of people and heard others, but just did what I had come in to do and then left.  Last evening I baked a batch of chocolate chip cookies, so the baking continues.

Fletch got a tree!  He had the guy cut it way down and it is now in a tree stand on a table in the living room and looks great.  Lights are on, but it is not decorated yet...maybe tonight when Colin is over (though with the mild temps we may opt for a fire outside).  The best part is that it was still upright when I came downstairs this morning!!  Mabel has not shown a whole lot of interest in it which is a good thing.

Meanwhile, what's for dinner?  Tonight it is vegetable beef soup which I just started in the crock pot.  Later I'll bake some bread to go with that.  The recipe I'm sharing today is Colin's and it is what we had for dinner on Monday.

Chop/mince the entire head of garlic and sautee in EVOO.  Add the rinsed and drained beans.  Mash some, but keep some whole.

Drain, chop and add the artichoke hearts.  Once melded, season with salt and pepper and integrate a lot of chopped fresh parsley.  Remove from heat. 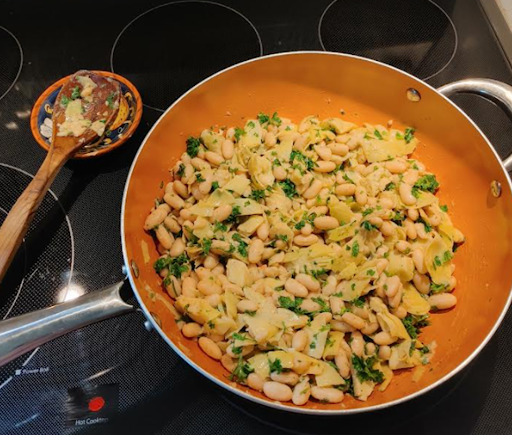 So delicious and nutritious!  We had it over some crusty bread that I had warmed in the oven.  This, by itself, was plenty for me (I did put some kalamata olives on the table too), but Fletch wanted a little something else, so he had some pepperoni on the side.

The dish comes together quickly and it is very inexpensive to make too.  A good vegetarian meal.

I'm off to a slightly later start than usual (a good night's sleep again!!), so I'd best get moving on my Thursday reports.  I'll check out blogs a bit later.  Have a wonderful Thursday!