It is a grey/overcast day here in Eastern PA.  Probably by mid-morning it will be raining here.  That's ok, I've a busy day ahead of me and the garden could use a good soaking.

True Confession:  Until yesterday, I had never made home-made sauce using fresh tomatoes!  I know!  I've made sauce using canned tomatoes or jarred marinara sauce that I "doctor."  But early yesterday morning (right after I posted yesterday's TNT post) I donned leggings and wellies and headed back over to Rob's to pick more tomatoes.  The bounty: 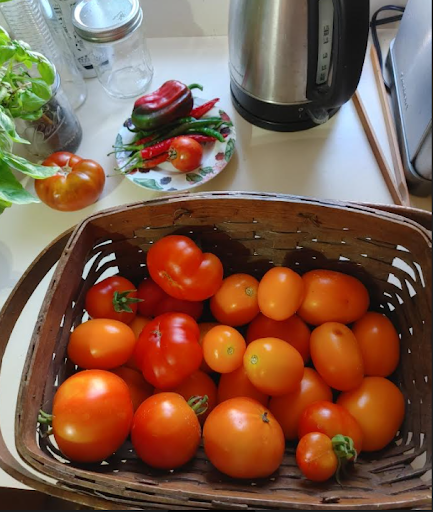 A nice haul, no?  The red and green bell pepper on the small plate at the back is from our garden.  The hot peppers are the ones I picked at Rob's on Saturday.

I hauled all the tomatoes into a collander and washed them. 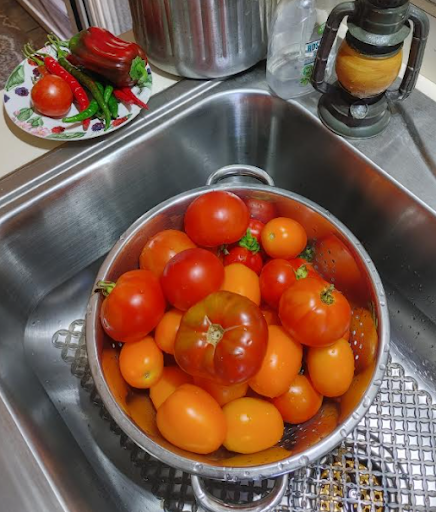 That's a lot of tomatoes.  I found a NY Times recipe that calls for halving the tomatoes horizontally and then grating the halves against the large holes of a box grater and then discarding the skins.  Before doing that I got a bunch of things cooking in my pan:  an onion from the garden, the red/green bell pepper, part of another pepper, a shallot, fresh basil, a bunch of chopped mushrooms, a bit of oregano and some parsley.  And, of course, about 3-4 cloves of garlic minced.  While that simmered in a smear of EVOO, I set to grating the tomatoes.  Turns out there were 40!  My largest mixing bowl was filled pretty much 2/3 of the way up with tomatoe juice and pulp.  I added the previously cooked hot and sweet sausage to the mix of veggies in the pan and stirred that around a bit to let it cook some more.

Then I poured the tomato goodness into another pan, added a bit of salt, some basil sprigs and some tomato paste and got that simmering.  I let it cook down a bit and then added the veggie mixture with the sausage.  Oh man!  The house smelled wonderful and the tastes I had were delicious. 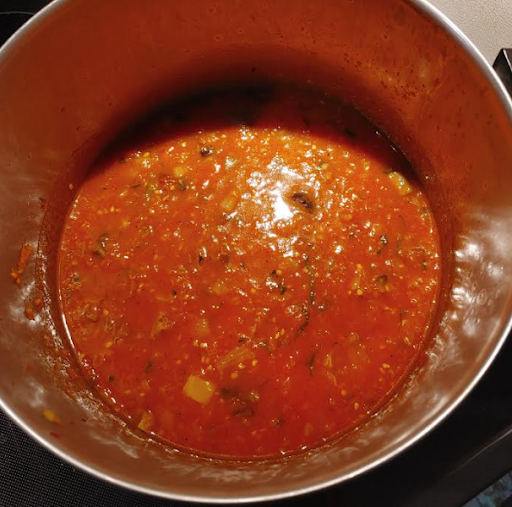 We had planned on having this over pasta last night, but when I texted the above picture to Colin he asked if we could have it tonight when he will be coming over for dinner.  Being a nice Mom I said "of course" and promptly took some salmon out of the freezer for Fletch and me to have last night ("Firecracker Salmon" which is a recipe for another day!).  The decision tonight will be what kind of pasta?  We typically have a big salad with pasta and sauce, but Fletch picked a lot of green beans and has requested that we have those (steamed).

It was fun to make and I'm sure it will taste good tonight.  Next time I make this though, I think I will simply roast the tomatoes in the oven and then throw them in the food processor to chop a bit and then put in a pan to cook.  Roasting gives tomatoes such a deep (and somewhat sweeter I think) flavor.

Time for another cup of coffee and then start in on my Thursday reports.  Hope your week has been going well.