It's early (not yet 6 a.m.) and still kind of dark here.  The sun is just beginning to show itself.  Tyg was not on the patio this morning when I came downstairs, but it is earlier than usual, so I expect he will show up soon.

I've another busy day ahead of me!  It's Thursday, so I've my usual financial reports to run, and a few folks have been asking for other data.  Meanwhile I did not get the cleaning done that I expected to yesterday.  Mostly because Fletch was in the way - LOL.  But he will be out all morning today, so I want to get my reports out of the way and then I can concentrate on getting some personal chores finished!

It's chilly enough that I just got up to turn off the ceiling fan in the office!  And, when I looked out one of the windows I spotted a fox running across the road to our neighbor's yard.  I'll go check for Tyg in a moment.

One of the dishes I made this week (in my new oven!!) was Baked Ratatouille, and it was delicious.  This is the recipe I used: 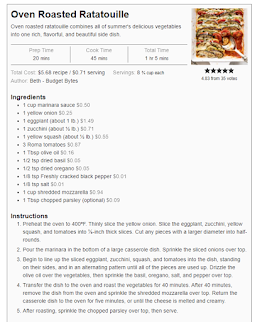 I liked the idea of slicing the veggies and layering them...could be so pretty...but I didn't want to spoon out some and only get eggplant or only get zuchinni (God forbid in Fletcher's case).  So instead I chopped onions, yellow squash, zucchini, eggplant and mixed in some minced garlic and fresh basil.  Sprinkled EVOO over it all and mixed well.  Then I layered the marinara sauce in my pan and covered that with the veggies.  I chopped up a bunch of Compari tomatoes and sprinkled those all over the top.  After baking it at 400 for about 40 minutes, I pulled it out of the oven, added shredded mozarella cheese and popped it back in the oven until the cheese melted.  There was one kaiser roll in the frig, so I split that, buttered it and added garlic and put that in the oven whlie the cheese was melting.  That was dinner!  So good.

This is a recipe that you could mix other things in as well.  Mushrooms would be good or some Italian sausage for added protein.  There was quite a bit left over and I froze a large container for later as well as put a smaller container in the frig for lunches.

Just checked and Tyg was curled up on one of the patio chairs, waiting for me to come to the door.  He's having breakfast now.  So all is well.

Time for me to get a jump on my reports.  Have a great Thursday!