The days are zipping by, aren't they?  We are in the last week of July which just does not seem possible.  And it's Tuesday, which means TNT time.  First up the Coverlet Birds piece which now has a mirror image of the first bird. 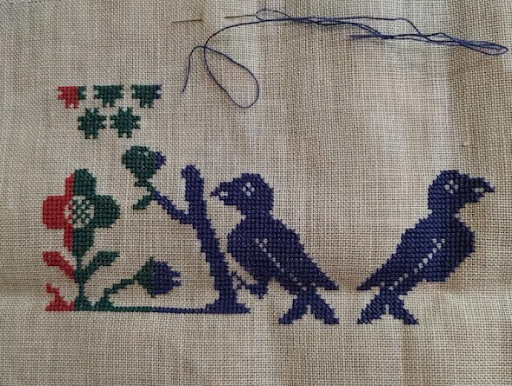 Well, amost completed.  the little leg and foot have yet to be stitched...then the branch or whatever it is next to the bird.  There are also some blue designs above the two birds.  Another day and more will be added.

The Pomegranate Bird Sampler is another story.  A little bit more has been accomplished, but it is slow going (40 count fabric and right eye needing cataract surgery and left eye trying to work with a glasses lens that is not correct now). 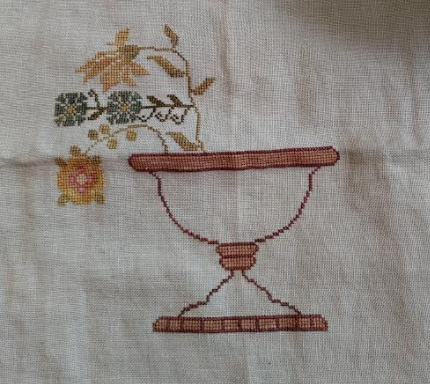 I realized, too, that I have been slow to work on this for another reason.  I don't particularly care for the color of that top left flower (the color is "whiskey").  The sample on the cover of the chart shows it to be a pink color which I prefer.  I was thinking all along, hand dyed threads and the color will vary from skein to skein (which it does), but then when I looked at the entire chart yesterday I realized the designer had used the incorrect symbol for the upper left flower.  The one that will appear on the right (eventually) is coded in the correct color.  Dilemma!  I will not be ripping it out and putting the correct color in.  The stitching is way too tiny to rip out and I'm sure I'd end up with a hole in the fabric.  So it will stay.  I may lay out the pink thread and see what that would look like to finish this left hand side flower.  Only about half of it is stitched.  And the pink is very pale, so it could appear as though this particular flower is beginning to "go by."  When I get to the other side I will determine whether or not to make it match what I have already stitched or make it the correct color.  A question for another day.  And, honestly, in the grand scheme of things it is not crucial...just annoying and I really wish I had noticed that the wrong symbol was used before I started stitching it.

Well, I'm in a bit of a rush today.  It's now 7 a.m. and I need to pour another cup of coffee, get dressed, wake up Fletch and then leave for the office.  I'm meeting up with Bill (the new Lame Duck!) to review some things and print a lot of things.  Hoping (as always) to be home by lunch, but time will tell.  It already feels a bit warm to me.

Have a great Tuesday!