It's looking a little murky out around here.  It's not really foggy this morning, but it doesn't seem real clear either.  We had a tiny (i.e., not measurable) amount of rain yesterday - more thunder than anything else.  I think the bulk of it fell North of us.  Fletch ended up watering the garden - good thing.  I think there will be some beans to pick in a few days and the peppers (both bell and jalapeno) have come back nicely after being munched down by the deer.  We have one ripe tomato and lots of green ones.

Thanks so much for all your comments on yesterday's post.   I really do appreciate all of your kind words.

The dermatologist appointment went ok yesterday.  I now have two stitches on the very end/tip of my nose.  I go back next Monday to have the stitches out and they should have the biopsy results by that time.  Fingers crossed it's nothing.

As I mentioned yesterday, I have been able to stitch a bit on both samplers.  I find that after 30 minutes or so, I just need to close my eyes and rest them a bit, but the amount I am able to stitch improves each day, as well as the ease with which I can do it.

First up is the Pomegranate Bird sampler. 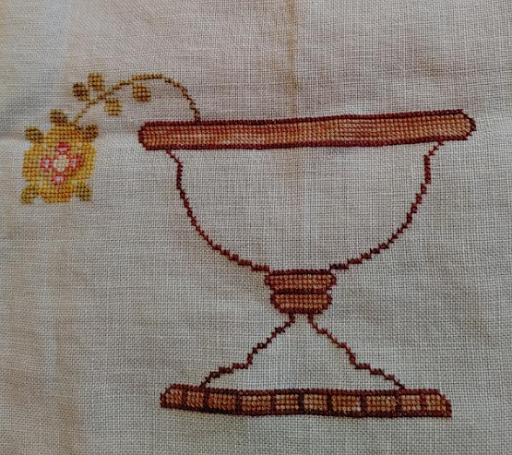 I was able to fill in parts of the center urn.  Now I can move on to doing more flowers and...eventually...the birds!!

The Coverlet Birds piece, being on 32 count versus 40 count, was easier to work on and some decent progress was made. 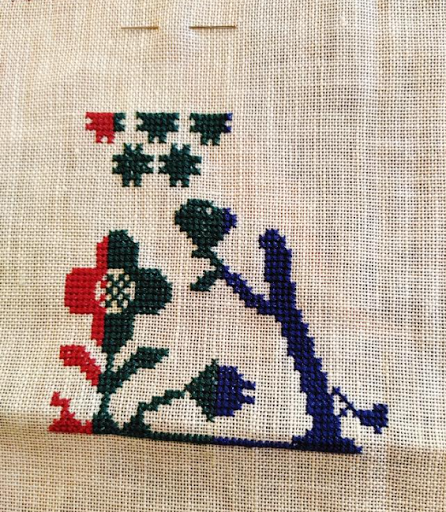 I really like the look of this...one color moving into another...red, then green, then blue.  It really does begin to look woven.

So the big reveal at work did happen yesterday...to some of us...I believe the announcements will be coming out sometime this morning via email.  My boss, Bill, has decided to retire as of April 1st.  His territory is huge and he will actually be replaced with two folks - one for the East Coast and one for the West (including the coast line as well as TX, LA, AR, OK, etc.)  In addition, another President is retiring as of the end of December.  Half of his world (mid-Atlantic) will go to the new East Coast President and the other half will remain with one of his RVPs who is being promoted to President.  Mike, one of my RVPs in the NYC area has been promoted to President for the East Coast.  The West position hasn't been finalized yet...believe that my two RVPs - Sean in CA and Randy in TX will both apply for the position.  The new positions will be effective 10/1/21 - the start of our fiscal year.  Lots of moving parts!

I will still support Kevin and Bruce and, most likely, whoever ends up taking over the West area.  I believe/hope that Mike already has an assistant who will support him.  This has made me think of retirement a little more frequently in the past few weeks, but unless there is a major upheaval (which I don't expect) I will keep on, keeping on.  As Bill said, I have a very sweet gig going on.

And that wraps up things around here for the moment.  I see the eye doctor mid-morning.  Tonight should be the last night I have to sleep with the plastic shield over my eye.  I don't mind the shield, but the tape used to keep it on bothers my skin.  Today is also the last day for one of the drops I have been using.  The other one will continue for 3 more weeks...at which point I will be having the other eye done!