I'm a bit of a sleepy-head this morning.  I did not wake up until 7:30!!  Thanks to Tyg being out all night, I was not woken at 4:30 or 5:00.  And that little guy was waiting by the patio door when I came downstairs to make coffee.  He has had his breakfast and is back outdoors!

How was your weekend?  Mine seemed to fly by in a blur.  I did manage to finish the mitts. 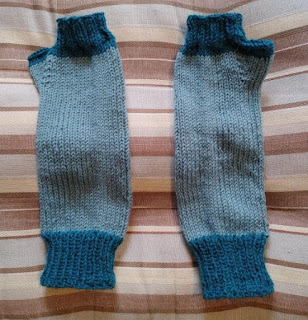 I'm happy with the way they turned out - the two tones of blue together are pleasing to me.  Whenever I knit mitts I tend to make them long enough to go up your arm beyond the wrist...no blasts of cold air to chill an exposed area!  These along with the dark blue Antler hat will be a gift for someone.

Fletch and I headed over to Colin & Mailing's for dinner on Saturday.  Initially we had planned to have a late afternoon walk, but it was windy and too cold for Fletch and me...and Colin said he and Mailing were feeling lazy.  So, a walk was skipped.  Dinner was not skipped and was delicious.  They made a fish stew.  A mix of potatoes, onions, garlic, cod, a bunch of herbs and some white wine.  When finished, the potatoes and cod are scooped out and served separately from the broth.  They had also baked bread (two loaves, so we took some home!!).  I had made an apple nut torte for dessert with whipped cream flavored with cinnamon. 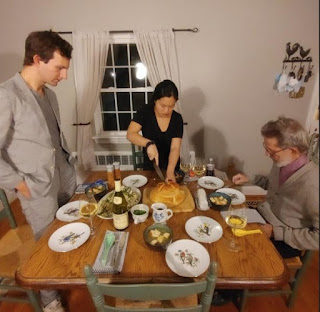 Isn't the bread fun looking?  After it rises, you punch it down and divide into one piece with about 2/3 of the dough and a smaller piece.  You form both into rounds, placing the smaller one on top of the larger.

Sunday was still pretty windy, but despite that Fletch grilled steaks for us for dinner.  Yum!

Today is a holiday for me from work, though I will most likely still do a little bit and then tomorrow will head into the office.  I have a bunch of stuff to print in color and should go through the mail, etc.  It should be a quick visit to the office.  But today I hope/plan to cast on for my Heart Warmer cowl and also a new Yule Wave Sock.  I revisited the one I knit that is SO tight and there is no way it will block larger.  Rather than knit a second and *hope* they will fit someone, I am abandoning that first one and starting over.  I've picked out two different blues from my stash and will figure out which looks best with the red (there is not enough of the original blue left for two socks).  And I will be taking the advice you all gave me and go up a needle size (probably up 2 sizes) to do the colorwork section.  Hopefully that will make it work.  I did try over the weekend making the sock on a 9" circular needle...figuring the colorwork would be easier on a circular rather than DPNs.  But apparently my hands are way too large to work with a 9" circular.  It was not comfortable!  Have any of you used a 9" circular.  Is there a trick to it?

Finally, I'll leave you with this picture that my friend Carol sent me.  It is an estate sale showing someone's stash!  That's a whole lotta yarn folks.  Makes my stash look like a drop in the bucket!! 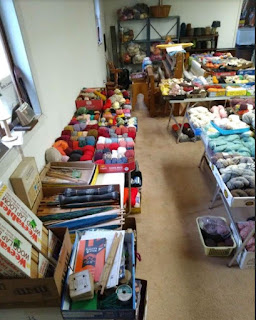 Have a great week!!