So, how are you all doing?  And how were your celebrations (or lack thereof)?  Fletch and I stopped going out on New Year's Eve decades ago.  We used to go into Philadelphia - a friend who live on South Street always threw a huge party.  But the drive in town was nasty and worse coming home.  So many folks on the road, etc.  Our routine now is that I make a crab quiche, we have a lovely dinner and I try to stay up till midnight (never a problem for Fletch...always a struggle for moi). 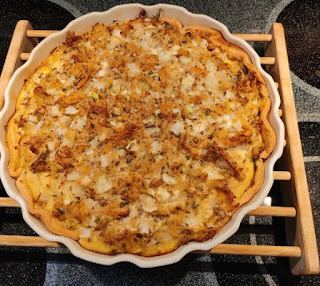 The crab quiche happened.  And man was it good!!  The recipe calls for 8 oz of crab, but I always put in a full pound.  This year I added some fresh spinach on the bottom, a bit of crumbled bacon and I cut back on the cheese a bit. 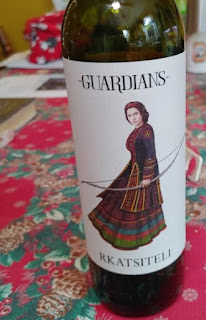 Such a great label!  And the wine was delicious - hints of apricot, light, fruity.  It is from Georgia (the country...not the state) and I highly recommend it.  I'm hoping I can find it again.

My plan had been to have a new cast on either New Year's Eve or New Year's Day and I was planning to make Heart Warmer which I have wanted to knit for some time.  BUT...I discovered I did not have any of the 16" circular needles called for (sizes 5, 4 and 3) and I didn't feel like using DPN.  So, Amazon to the rescue and my needles will be here Monday.  The yarn I've chosen is: 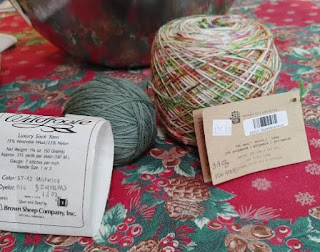 The varigated skein is not quite enough yarn, so I will use the solid "Mistletoe" coler at both ends of the cowl.

With that plan on hold till Monday, my new start today will be socks (what a surprise - lol).  My yarn is wound: 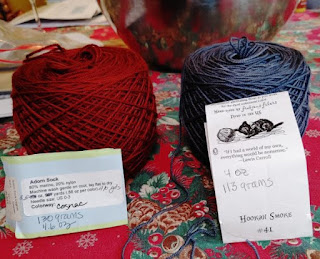 Both skeins from the stash.  (The "Hookah Smoke" skein was bought several years ago in Vermont when we were on vacation.  I had to buy it just for the name of the color!!  It is Wonderland Yarn.)  The pattern I plan to knit is Yule Wave - a free pattern I received from Carol Feller (Stolen Stitches). 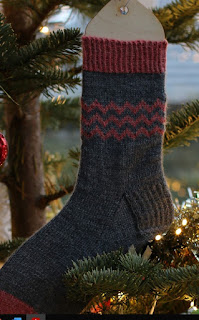 A dark picture, but you can get the idea.  They should be fun and pretty to knit.

There was no cast on last night...I tried to stay up till midnight but gave up at 9:30!  I ended up sleeping almost 11 hours, so I guess I really was tired.  Fletch said the neighborhood was quiet.  He could hear some fireworks, but all in the distance.

Today will be a quiet day with knitting and reading (and maybe even a nap despite 11 hours of sleep!).  Maybe a little yoga or a work out on the Gazelle we have (but it's in the basement and I find it SO boring).  Black eyed peas are cooking away in the crock pot with some spicy tomatoes (Rotel with chipolte!) and Andouille sausage.  I'll cook up some rice and some kale later on.

Well, after thinking I would not post until Monday the 4th, this has gone on for quite a bit!  Wishing you all the best start to a new year filled with joy, excellent health, laughter and love.  Enjoy!!