No snow or rain or sleet or anything yet.  When I let Tyg out at 4:45 a.m. (ggrrrrr) I looked at radar on my phone and it showed some wintry mix should happen a little later.  Hopefully it won't be too bad and will be easy to get out.  I need a couple of things at the grocery store that I forgot and another book is waiting for me at the library.

Last night's dinner of falafel (courtesy of Colin) was tasty.  The baba ghanoush I made was just ok.  I had intended to find out from C&M how they make it but instead used a recipe I found on the internet.  Plus I only had one eggplant, so it didn't make a lot.  Anyway, we had the falafel, baba ghanoush, some cucumber and radishes and a piece of bread toasted (I did not have any naan or pita bread). 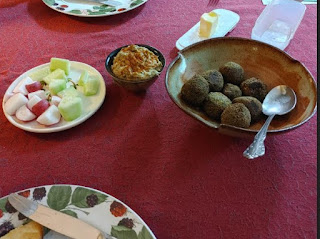 The little bowl in the middle is the baba ghanoush (paprika on top).  Actually there was a little left which surprised me.  The falafel are very filling.  Tonight I plan to make a beef stew using my new Dutch oven!!

This past week saw me add a bit to the border on my Quaker Autumn sampler.  The right side border is now complete and hopefully the right and left will meet on the same line in the middle!  (And if they don't?  I will definitely fudge it...nothing will be ripped out!  LOL)  Here is an overall shot of where the sampler is today and then a close up of the two motifs I stitched this week. 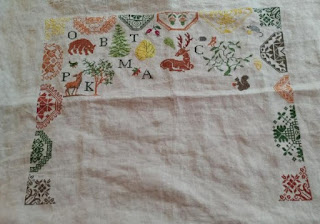 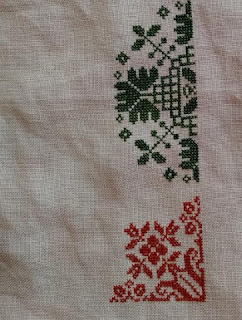 There are still so many creatures to be stitched along with more leaves and a whole lot of letters.  Of course another (PITA) fir tree to stitch - so pretty to look at but quite a pain to stitch.  There's enough going on that I have not gotten bored with this one (thank God).  I already know in my mind what I want to stitch next (and it's another BIG one), so I'd best step up the pace on this one!

There is some work stuff going on today, but as usual I'm hoping to carve out a bit of time to knit and stitch and maybe read a chapter or two.  Hope your week is going well!