Yesterday turned out to be not as bad or as tiring as I feared - being in the office.  There were a lot of folks around and only one mask to be seen.  But, everyone is vaxed and boosted and distances were observed.  My bosses were understanding about my need to leave early afternoon so that was not a problem.  Today will be similar, I'm sure.

I left the office around 1 p.m. and once home I wanted to cut a few small blooms for a bud vase before the major storm arrived. 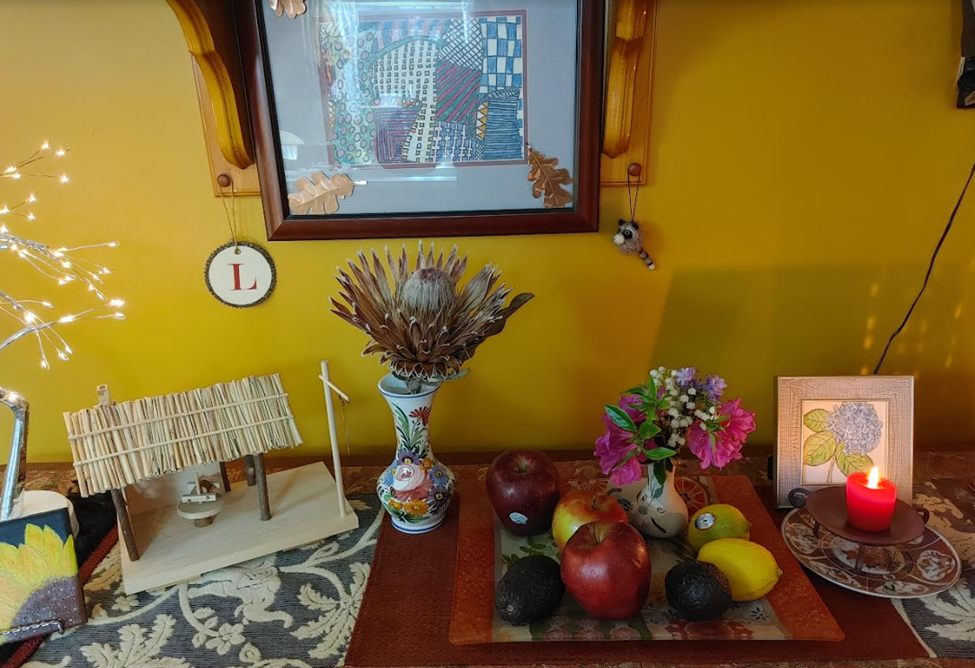 Some Lily of the Valley and some Azelea blooms.  So delicate!  And the Protea is still hanging on - so weird!!

We did not get the afternoon storm that was forecast.  That mostly went North of us.  But, right around 6 p.m. the wind picked up and sure enough, some rain and hail fell.  Volume on and you can hear the hail hitting our picnic table.

Everything sure is lush!

Let's jump to Adam & Eve (who still have not made an appearance yet) this Tuesday morning for a TNT update.  Only a little stitching was accomplished this past week. The branch under the BIG bird has been added and the two side borders in red have been lengthened a bit.  Obviously still a way to go on this, but it's still fun and that's what matters.

Colin & Mailing are flying to Pittsburgh today.  They are meeting up with friends Rob and Faye for a one night overnight backpacking trip in the Laurel Highlands and then friends Christina and Michael are getting married Saturday at the Pittsburgh Botanic Garden (Oakdale).  Both Mailing and Faye are in the wedding party, so there is the rehearsal dinner and cocktail hour Friday...wedding Saturday...and reception (also at the Botanic Garden).  Hope they have good weather for this.  And then just 2 weeks later the kids will be back here for another wedding!

OK, time for me to get dressed and ready to drive to the office.  Wishing you all a great Tuesday!