A Walk and the Cold Frame

It's Friday and both of my conference calls have been cancelled.  Woo-Hoo!  The day is mine...well, kind of...we'll see how quiet work is.  I plan/hope to clean the bathrooms and do some of my PT exercises.  It will be raining here shortly and is supposed to rain all day today and tomorrow.

Because of the wet forecast I decided to take a walk yesterday afternoon even though I had gone to PT in the morning.  I went to the River Trail which meanders alongside the Schuylkill River in Valley Forge Park.  I ended up walking approximately 3.14 miles (I use the app "Map My Walk" for distance purposes) and for at least the last half mile back to my car I was walking like a cripple!  I think it might have been too much with all the stretching and exercising I had done earlier in the day.

Anyway, it really was a pretty day and pretty warm.  I should have worn shorts and a tee rather than leggings and a lightweight flannel shirt (sleeves rolled up).  I was pretty sweaty at the end.  At the beginning of the trail from the parking lot, there is some movement on the river - a bit of white water (small, very small) and pretty.  Click to enlarge and with sound on, you should be able to hear it as well.

But not too much further along, the river is smooth as glass. The next picture is not great - was hard to get a good shot with the sun out.  But there were some interesting tree roots on the path and they made me think of various patterns either in knitting or stitching. 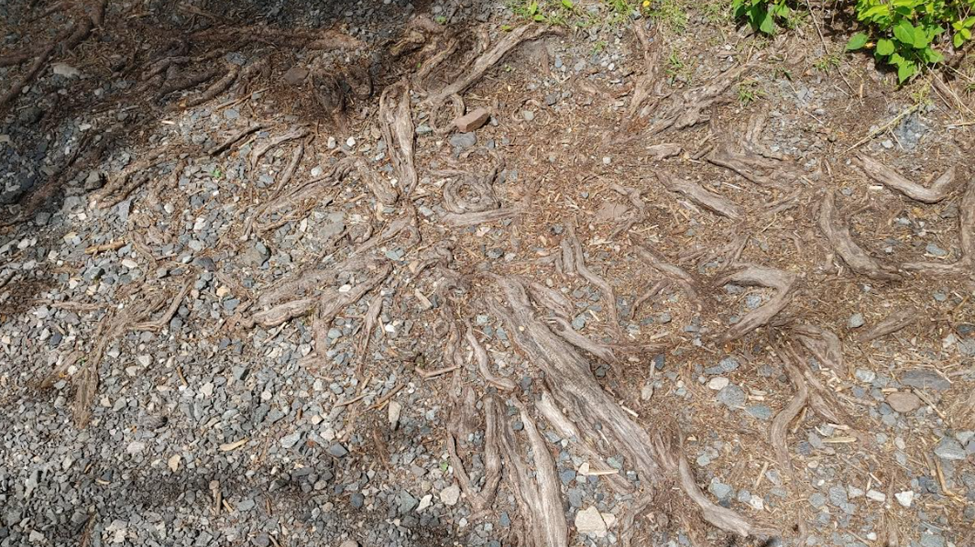 I saw or passed quite a few people running or walking (faster than I) or biking and I saw one person in a kayak on the river.  I also saw this guy thanks to a woman passing me who mentioned he/she was at the side of the trail. 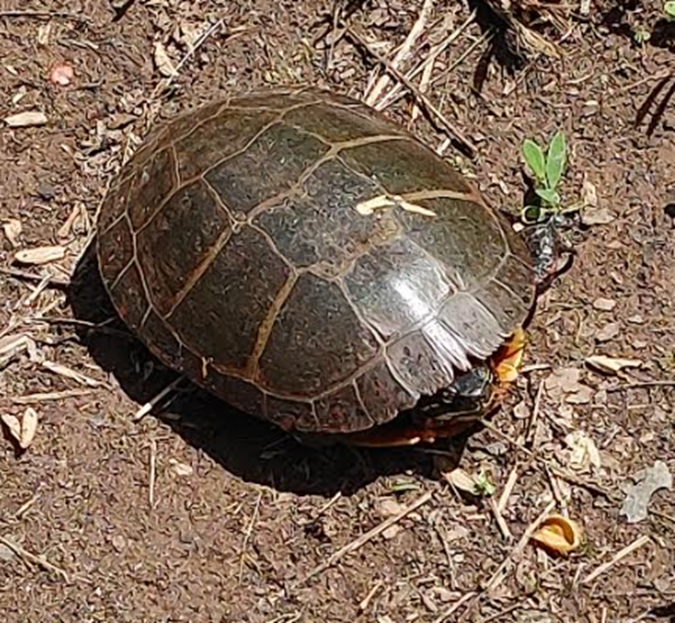 He/She kept sticking his/her head back in the shell every time I stepped around to take a picture.  Poor thing was probably traumatized.  I didn't spot the turtle on my way back - hopefully it wandered off into the high grass/weeds at the edge of the trail.

I sure do feel fortunate to have so many options nearby for pretty walks.  Next time (maybe Sunday??) I think I will head over to Oaks to the trail that goes along the Perkiomen Creek.  That should be particularly pretty after rain.

Finally, the other day I mentioned that we have a cold frame in our garden.  It is not huge by any means, but Fletch built one over one of our raised bed boxes.  He used old windows and some plexiglass he had and other odds and ends. The tall, spiky things on the left are sweet and red onions.  Then there is a variety (I think 4-5 different kinds) of lettuce, some swiss chard and purple bok choy (which is still very, very tiny).  I'm not sure if there is spinach or kale in there yet.  Plenty to harvest for salads for the two of us and we've done that a few times recently.  Last night Fletch cut the few asparagus stalks that had come up and we ate them raw.  Delicious!  (I don't think I'd ever had asparagus raw before.)  Tomato plants are hardening off on the patio, beans have been planted and you saw that the rhubarb is massive.

But what I am most excited about is that I found Gilfeather Turnip seeds on line and Fletch has planted them...and they are up!  Gilfeather Turnips originated in a town my Dad lived in for a short while - Wardsboro, Vermont.  I used to only be able to get Gilfeather Turnips when we would travel to Vermont in the Fall.  We would always stop in the local stores to get some.  They are sweet and very tasty!  I also gave a packet of seeds to my brother and he mentioned that he plans to harvest the greens too.  I had not thought about that, but it's a good idea, especially since you are not supposed to harvest turnips until after the first hard frost.

Growing up, I never thought I would be excited over a turnip - LOL

Well, Happy Friday everyone!  Wishing you all a wonderful weekend and Happy Mothers Day!