Another rather late start for moi.  I was up this a.m. but really didn't feel well, then I had to run over to feed the cats (Fletch had other plans and couldn't go) and then come back and run my usual Thursday reports.  Now it's almost lunchtime and all I want to do is take a nap!  And I will!

Thanks for all your commiseration on the dead mouse!  I'm happy to report that I have not seen any more (either last night or this morning).  And little Mabel continues to be into EVERYTHING!  A serious mischief maker if ever there was one.  The plant that she had tipped over twice was dumped again yesterday - potting soil/dirt all over the table and floor.  It is now on the kitchen counter which most likely is not a safe spot either (no place is safe).

Dinner last night was a pork loin that Fletch grilled and it was delicious!  We had new little potatoes steamed and I made a vegetable dish that my Mom used to make every Thanksgiving.  I don't make it for Thanksgiving because Colin won't eat it (he basically doesn't do dairy and this has cheese in it).  It is:

I sliced up a large Vidalia onion and half a yellow pepper, a red pepper and a green pepper.  I sauteed them in butter and then put them in a casserole dish.

Next you make a roux with 1/4 Cup butter and 1/4 Cup flour.  Stir in about 2 cups of milk and then a cup of shredded cheddar cheese.  Pour that mixture over the onions and peppers and bake at 350 for about 1/2 hour.

My Mom used to use the tiny pearl onions, but any onions work.  I've also used Jarlsburg cheese in place of the cheddar or a mixture of cheeses - it's all good.  Plenty of leftovers which is nice because Fletch LOVES this dish!

Colin & Mailing have asked that in addition to the pies I will make for Thanksgiving (apple, pumpkin and pecan) that I make my Mom's Cranberry Orange Relish and Fletcher's Mom's Cranberry Chutney.  Yesterday I made my Mom's relish. 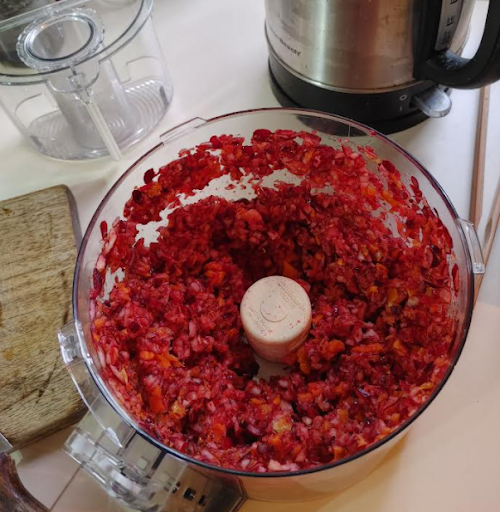 A food processor makes this a very fast dish.  A few pulses and you are done!  I never measure anything for this.  I used a mess of fresh cranberries and 3-4 clementines that I cut into quarters.  Threw it all in the processor and pulsed.  Voila!  Put it in a bowl and then just added and mixed in sugar.  Again, I don't measure, I just taste it and when I think it's sweet enough it's done!  I like it to still have a little bite to it.  We had some with the pork loin last night and then we took a jar of it over to C&M's and left it in their garage frig for Thanksgiving day.

Mix everything together in a lart pot and put on medium heat.  Simmer until the berries have popped - at least 1.5 hours.  Allow to cool then store in glass jars in the frig - it will keep just about forever!!

A few weeks ago I told you all about how brave Talbor was at the vet's and that he actually got a certificate of bravery (which I forgot to photograph at the time).  Well, here it is: 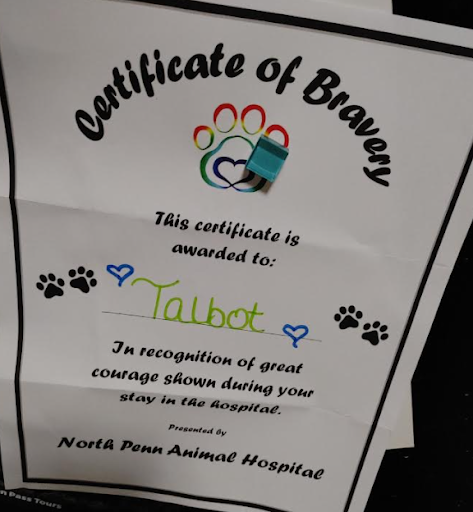 Isn't that the sweetest?

And little mischief maker just pulled a thread from a spool in my sewing cabinet...pulled it out of the office room across the hallway and into the kitchen.  Oy vey!  I've cleaned up that mess and now I think it might just be nap time!