Really I had no intention of posting today, but then decided that y'all should see what's been going on here this morning.

First of all, everything on my list yesterday except laundry was accomplished.  The laundry has now been started this morning.  The only thing I need to do today is whip cream to go with the pies I made.  I will do that closer to departure time.  Colin suggested we come over around 3 p.m., so that gives me the morning to relax.

The other day I pulled out a pair of hand knit socks to put on and discovered a hole in the toe of one (I guess my toenails should be trimmed down more frequently?).  I pulled out yarn and decided to darn that hole this morning while Fletch was in the shower. 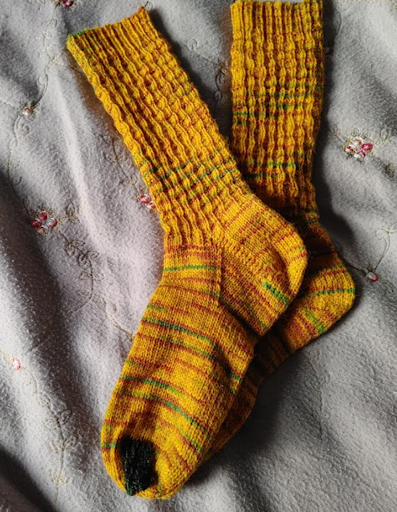 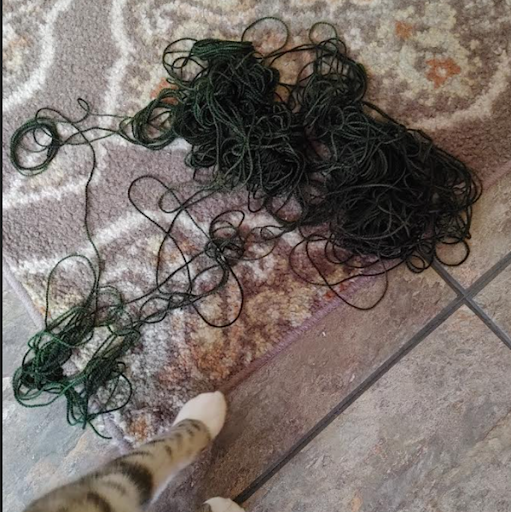 Someone had grabbed it, dragged it over to the rug in front of the refrigerator and then went at it.  It was too tangled to try to save, so it is in the trash.

Then I discovered this: 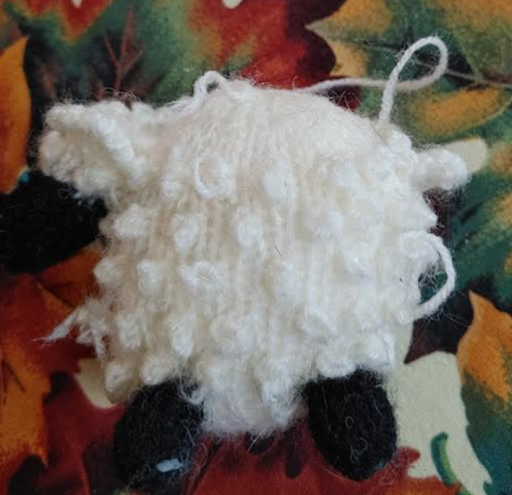 The sheep ornament my SIL had given me a few years ago has been chewed and threads pulled out.  Not once, not twice, but three times!  Little sheepy is now tucked away in a drawer along with a needle felted mushroom pincushion (also a gift from my SIL) and a little knit cat that I made the other year.  All of those things were on the top of an apothecary cabinet (where I have specialty thread stored) which sits on top of a dresser in the office room.  Sister Mabel has been jumping up there (where she does NOT belong) and grabbing whatever suits her fancy.  Oy vey!  I will say that she has somewhat lost interest in her favorite ribbon...there are more and better things to be found apparently.

Mabel's appointment at the vet went well yesterday.  She had gained a little weight (up to 6.13 from 6.5).  She put up with her last shot very well and was pretty well behaved last night.  She actually was on the couch in Fletcher's lap or mine while we watched a show!

Oh well, if all I need to worry about are the antics of a very lively kitten, life is good!  I plan to do some knitting, make the whipped cream, get a shower and then head over to C&M's for a feast.  Wishing you all a wonderful day!