Whew!  We had some MAJOR storms roll through here yesterday afternoon.  I mean MAJOR!!!  The sky literally turned black and then the wind started.  I heard later winds were clocked at 89 mph!!  The party canopies set up at the front of our building to protect folks from hawk fallout were completely blown over.  And, we lost power at work.  Our training room where Bill was doing his budget reviews still maintained power.  That one room had been set up initially with a built in generator because that is where our payroll department was when payroll was done here rather than at our parent company in Charlotte.  Anyway, I left around 1:30 when there was still no power and here are two pictures I got pretty close to our office. 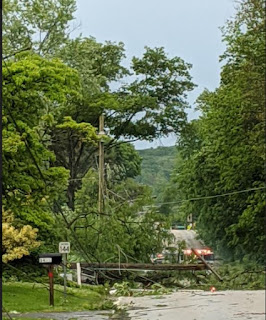 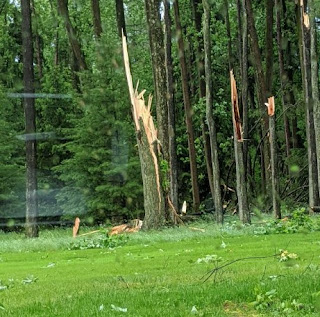 Looks to me like tornado damage, but apparently it was a Derecho storm which I had never heard of!

My ride home included a number of detours due to downed trees, downed wires, etc.  This morning some roads are still closed.  Luckily we had no damage at home, but our power was out until 11:30 last night!  The power is still out at my office.  I'm here and Bill has his last day of budget reviews - they will be in the bunker, so they will be fine - lol.  And I can work as long as the battery in my computer holds out!

Gotta run - I have a ton of work to do.  Hope everyone is well.