How was your weekend?  Mine was nice.  We started Friday night with a fire over at Colin & Mailing's.  We had to escape in to their sunroom for a short period of time when it started raining, but that didn't last long and the fire was burning even better when we went back outside!  They did cancel (or postpone) their solstice party due to the rainy forecast - they did not want a bunch of people in their house.

I was up early Saturday and by 8 a.m. was out on the path by the canal.  Boy was it muggy!  But there was lots to see.  First up, plenty of animal babies. 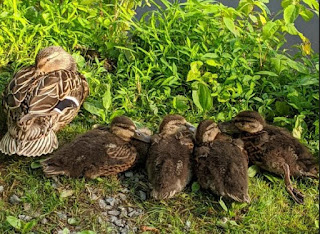 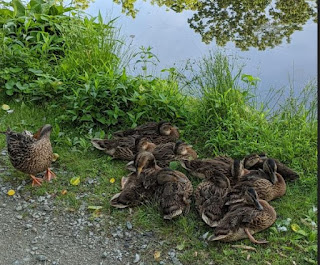 There were also sleeping ducks in the middle of the path 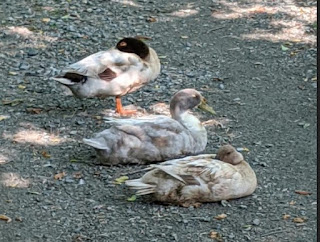 By the time I was walking back these 3 characters had finally moved over to the side of the path.

I saw a HUGE group of geese on the canal. 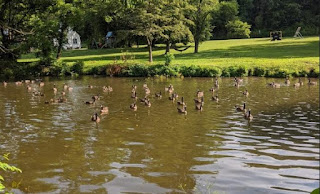 A man and his dog on the other side of the canal were chasing herding all these geese off the lawn and into the water.  Pretty noisy and funny to watch.

All of the wildflowers along the side of the trail are beginning to bloom.  So many different scents and colors. 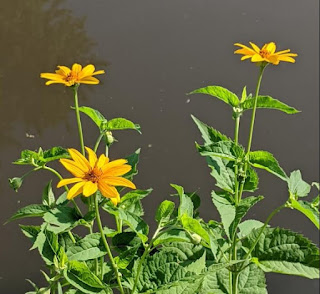 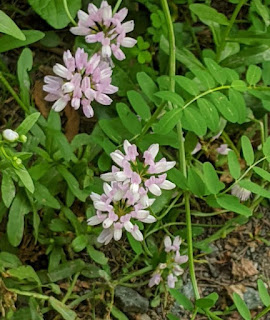 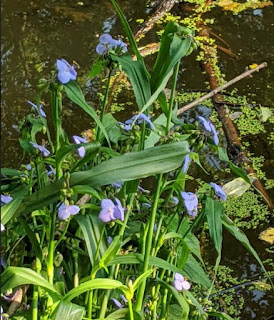 There were a lot of folks out running, walking, biking.  It was a very pretty (though muggy) morning.

Fletch and I made a Costco run later in the morning and that pretty much wrapped up Saturday.  We watched Episode 1 of Laurel Canyon that evening which was ok.  We both liked Echo in the Canyon better - more music.

We ran separate errands Sunday morning and then did grocery shopping in the afternoon.  Fletch did his errands at Lowes and came home with this beauty: 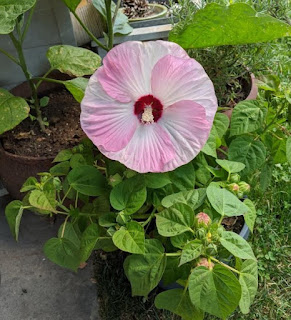 There must be at least 50 buds on this.  It is absolutely gorgeous!

We had a relaxed dinner of chicken sauteed with sun dried tomatoes, peppers and scallions.  Plus a summer squash casserole.  I made strawberry shortcake, but we were both too full for dessert!  Last night we watched the second (and last) episode of Laurel Canyon and it was much better than the first one.

I did manage to start a new pair of socks with the Tomfoolery yarn, but I'll save that picture for another post.

Now it is back to work!  It is a beautiful morning here and I will try to get out for a walk a bit later.
Posted by Vera at 7:11 AM