It is a very sticky morning here.  We had more storms last night; fortunately not nearly as severe as on Wednesday.  But the air is thick this morning and rain is forecast for pretty much all day and into the evening.

We have plans to go over to Colin & Mailing's for dinner and were hoping to eat outside and maybe even have a fire...don't think that will be happening.  But, it will be good to see them.  I'm going to make a corn (with left over corn-on-the-cob) and black bean salad to take over and we are just planning to order steak sandwiches and make it an easy meal.

Last night found me fairly restless and I woke up early this morning.  So...what is one to do but work on a crafty project.  And with that, May Basket by Blackbird Designs is finished! 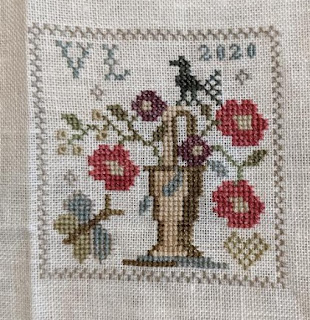 It was a fun project.  I'm not sure of the linen count - it is either 30 or 32 count.  The threads are Sampler Threads by The Gentle Art.  I worked on it a little last night and thought (ha!) I was finished so I stitched my initials and the date.  Then I realized I had forgotten to stitch the center of one of the flowers and then discovered that I had forgotten half of the butterfly!  I'm not sure what's up next - I'll look through my (extensive) stash sometime today and either pick out another small - they are so satisfying to do because they work up quickly - or I will pick out a sampler to start.

My Friday work day has eased up.  Originally I had 3 conference calls this morning, but two of those have been cancelled (at my urging - lol).  Bill and I were both going to go back into the office today to work on budget stuff, but the office is STILL without power!  Our data center and the "bunker" have power thanks to generators, but the balance of the office has none.  An email came out yesterday afternoon saying that PECO (electric company) doesn't expect our power to be restored till late tonight or some time Saturday!  Thankfully Bill called late yesterday afternoon and said let's not bother going in!  YAY!!!

I still have work to do, but at least I don't have to drive into the office.  Hope you all have a wonderful weekend!  Enjoy.
Posted by Vera at 7:34 AM