We just finished another brief thunderstorm here and it feels so much better outside this morning than it did yesterday.  We also had some nice storms last night around dinner time that quickly dropped the temps from 92 down to 74!  Some strong winds and we were able to open doors and turn off the AC.  I even slept with windows open last night and the AC off.  It was wonderful!

So, yesterday was HOT.  Work was busier in the morning than I expected or wanted (LOL).  I did run out for two errands - had to pick up a prescription at CVS and then stopped by the library for a curbside pick up.  After lunch I got busy making the peach pie - because why not have the oven on at 400 degrees when it is 92 outside?  I used Ina Garten's recipe for a "perfect peach pie"  This Recipe which inlcuded a recipe for a pastry that was a little different than what I usually make.  The pastry was a little difficult to work with, but I think that was a case of our weather rather than the recipe.  It is difficult to work a pastry in hot/humid weather.  It turned out anyway (with a patch or two): 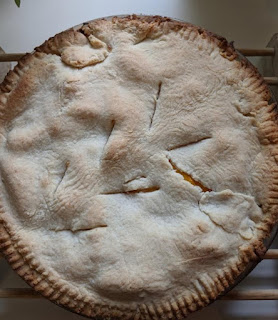 Ina's recipe calls for the addition of fresh orange juice and orange zest.  It added a nice "tang" to the sweetness of the peaches and the pie was very good.  I didn't do a lattice top because someone had gifted me a decorative rolling pin that I wanted to use for the top crust.  Unfortunately the design didn't really show up and actually faded some with baking.  I will try again with a different recipe.  I also completely forgot to do the egg wash and sprinkle the top with sugar (but it tasted fine and was sweet enough).

I did manage to finish the heel flap on the second Tomfoolery sock, but I really felt like stitching.  So, this is essentially another TNT post - this one being Tiny Needle Thursday.  The acorns are finished and the squirrels have appeared!! 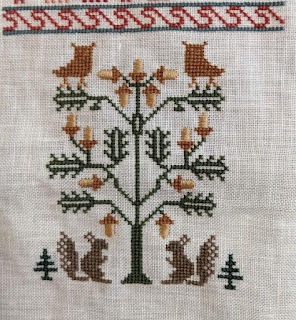 I just love those squirrels.  That are two more trees in this section (on the outer edges, right and left).  After that there is a dividing band and then another band with numbers (since the alphabet is finished).  And that's it!  So the end is in sight and I'm really enjoying this.

Meanwhile, I see that the emails (work-wise) are coming in fast and furious, so I'd best hit publish on this and get back to work.  Enjoy the day - we are almost in weekend mode!!
Posted by Vera at 9:12 AM