It is early and definitely darker in the mornings these days.  5:30 a.m. and just beginning to get light outside.  As forecast, it was a hot weekend, but it didn't seem as bad as Fletch and I were expecting.

Friday I managed to finish the 2nd Tomfoolery sock!!  I do love the way these turned out. 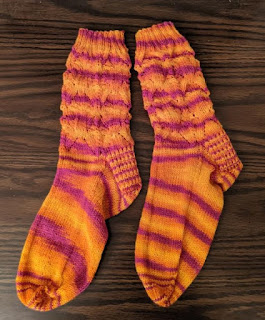 Obviously one pooled a bit differently than the other - but the legs look fairly similar (which is the part that will be seen), and matchy-matchy isn't really my thing anyway.  I think they look fine on. 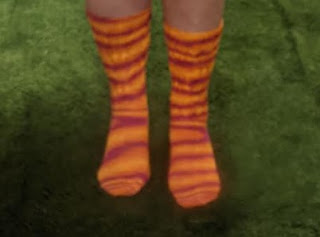 It kind of cracks me up that the first sock took a month to make and the second one took a week.  I'm glad it's that way and not the other way around...just weird though.

Our home made pizza that night was really good.  We added some broiled eggplant slices and onion slices (both from the garden).  I also added garlic scapes chopped up which was tasty as well as a ton of mushrooms.  Yum!

Saturday Colin & Mailing came over for dinner.  Fletch grilled a pork loin and I made a pasta salad with fresh veggies in it and we had a bowl of fresh garden tomatoes.  So good!  Colin and Mailing went to check on Colin's work garden and came back with a spaghetti squash for us.  I need to figure out when to add that to this week's menu plan...or just to re-plan our menu.  The night was really pleasant and we ended up sitting out by a fire.  Finally around 9:30 I felt as though I were being bitten by a million bugs, so we called it quits.

Sunday morning I made blueberry pancakes and bacon for breakfast.  And then dinner was a simple but delicious meal: 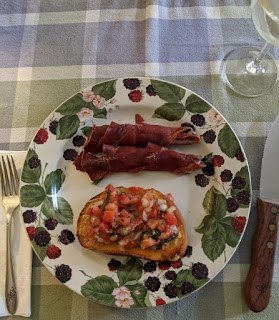 Asparagus wrapped in prosciutto and Italian bread brushed with EVOO and broiled then topped with bruschetta.  There are plenty of leftovers for munching during the week.

Today I'm going into the office for a short while.  I need to print some things on the color printer and I'll stick around for my 10 a.m. conference call.  I have a bit more work space in the office than at home, so easier to be on speaker phone and take notes, etc.  After that I'm heading to JoAnn's for some needed embroidery floss.

Last night was one of those nights where it took me FOREVER to fall asleep.  I read the first chapter in Conjure Women and turned out the light.  Two hours later I was still tossing and turning.  And then I woke up early!  Oh well, I can always take a nap this afternoon if I want.

I hope this last week of July (how did that happen??) is a good one for everyone.  Enjoy!
Posted by Vera at 5:59 AM