Here we are - already back at the beginning of a week.  Not sure how that happened so quickly.


Thank you all for your comments/concern about Tyg.  He is fine.  Turns out he has allergies!  Ever since we rescued him we've been aware of how he dislikes the heat.  Come the summer and the hot weather his lips get all red and sometimes puffy.  Well this year that hasn't happened as much, but he has been scratching more than normal (no fleas, thank goodness) and apparently has scratched himself raw!  The vet did give him all his shots which he was due for in August and we have prednisone to put in his wet food each morning and a medication to put on his scratchy areas which will reduce the itchiness.  He was pretty lethargic both Friday afternoon and Saturday (shots will do that), but by Sunday he was already noticeably improved.  He is not scratching as much and the areas he had been scratching are much, much improved.  He doesn't like the gel stuff we rub on him, but it's working!


The weekend was really nice.  Saturday was pretty grey, but we never got the forecast rain.  We did grocery shopping in the morning including checking out a new place called "Foodery" billed as having "Food and Beer From Around the World."  It was almost ALL beer and wine.  That is not necessarily a bad thing, but don't advertise food from around the world if you only have a few snacks and deli items.  But, at least now we know.  I walked by myself that afternoon for a little over an hour in Valley Forge Park.  It was so humid that I was dripping by the time I got back to the car.


Sunday was gorgeous.  I ran errands in the morning and walked again in Valley Forge for over an hour.


A little knitting was done - not a lot, but some. 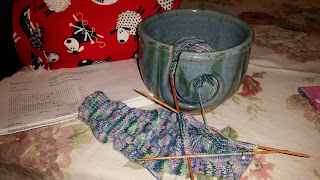 I've turned the heel and am in the midst of decreasing gusset stitches on the 2nd sock.  The end is in sight!!


Today should be a relatively easy day and I'm looking forward to yoga tonight.  Hope you all had a wonderful weekend as well!