My office announced on Monday that it would not be open Tuesday.  Our blizzard never materialized, but I'm glad I didn't have to go to work.  We had snow, then icy pellets that hit the windows with a loud noise, then freezing rain, then more snow, etc., etc.


I had been all ready to go to yoga Monday night when Maria, my teacher, called to say she was sick and class was cancelled.  Colin was on his way over to spend the night and was picking up Chinese food for himself and Fletch.  I quickly texted him with my order and we settled in for a nice evening.  The boys watched Arrival which I had no interest in seeing (don't really care for SciFi), and I sat in the kitchen and worked on Colin's sock.


Our forecast was for 4-8" overnight, but we only got a few.  Colin was up at 5 and out shoveling and then I took him into work around 7.  At that point, the roads were not bad. 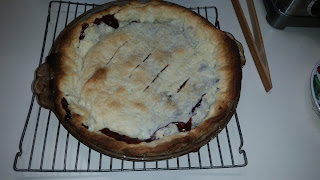 Yes, the edges are a little burnt (which I do like)...I was busy texting on my phone and checking blogs and e-mail and time got away from me.  It was good anyway.  Raspberry pie.  Yum.


In the afternoon I baked Cuban Bread. 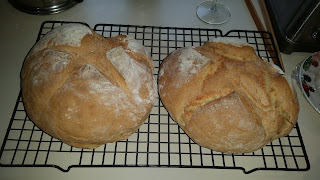 This is the easiest bread recipe ever (not using a bread machine) and delicious!  It has a great crust and the inside is nice and chewy.


Snowing and sleeting all the while.  Fletch went out to shovel.  He didn't bother with the snow blower, but said it was some of the heaviest snow he had ever had to shovel.  Our neighbor was using his snow blower and it sounded like a sick cow -- just struggling to get through the mess.


I picked Colin up from work (roads were worse, but passable) and he decided to spend another night rather than risk going home after dark on country roads.  I made a big pot of curried shrimp chowder to go with the bread.  And knit some more.  I'm about halfway done the foot on the first sock.  I did not bother trying to work on the shawl.  The wind and ice were too distracting.


Today it is back to work.  I took major roads into my office rather than risking the back roads through Valley Forge Park.  Some side roads are still pretty snow covered and there was a lot of standing water yesterday which is now all ice.  Still bitter cold, so I don't think much of anything will melt today.


I did cut some daffodil buds Monday night...I just didn't want them to all be damaged by the snow.  The buds were extremely tight and I wasn't sure they would open, but as of this morning they have started to open up.  So pretty to have a touch of Spring on my windowsill.


Hoping everyone in the path of the storm made out ok (My girlfriend in the Chesapeake City area of MD lost her power at 9 a.m. yesterday...and is not expecting it back until Noon at the earliest today).  We have the possibility of more winter weather this weekend, but I'm not even going to think about that right now!