A Finish, A Re-Start and a Beginning


Thanks for your nice comments on yesterday's post.  It was a lot of fun for me to look through my Mom's scrapbook again - I hadn't pulled it out in several years.


Colin's socks are finished!!  The pattern is Petty Harbour (free on Ravelry) and the yarn is Regia.  I really like how they turned out and he is coming over for dinner tonight so I can hand them over. 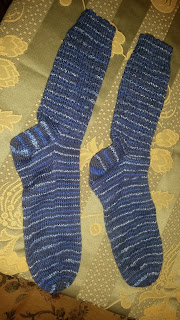 They are the same size, even though this picture makes the one on the left look larger.


Last night I pulled out yarn for some socks for me and then decided it was too dark and wintry-like.  I want to wind the skein of "rhubarb" yarn I bought in Lancaster and knit some Spring socks with that.  Hopefully tonight I'll have the time to do that.  In the meantime, I ripped out what I had started on the Mick Jagged shawl and have brought that to work today to re-start.  Pictures later.  The yarn is pretty - two skeins of Miss Babs Yummy 2 ply in blues (Dark Orion and Daydream Believer).


As I mentioned in an earlier post, I did start Sigla over the weekend.  I haven't gotten any further, but here is the start. 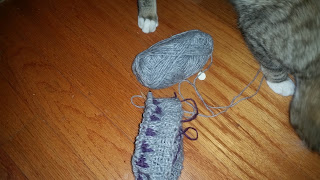 Someone was trying to play with my yarn.  Here are the colors that I'll use for the "flags" on the sweater: 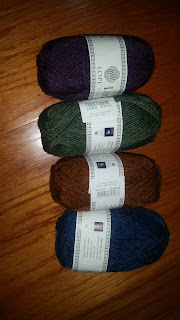 Starting from the top :  purple (which is done in the first shot).  Next up green, then a rusty color and finally blue.  Kat has made excellent notes on modifications for the neckline - making it looser.  I want mine pretty tight, so hopefully this will work out.  It's not quite at the point where I can test it, but fingers crossed.  I think it will stretch enough.  If I can keep at this, I should be ready for Fall and Winter when they next show up.


Nice to be almost at the weekend.  And, next week should be an easy one (or boring) for me - both of my bosses will be in Key West for a Division President's get-away (tough life, I know).
Posted by Vera at 7:53 AM