Tuesday...TNT...But No TNT to Show

It's Tiny Needle Tuesday, or TNT, but I've got nothing to show you.  That's right, I did absolutely no stitching in the last week.  And hardly any knitting!  I did start a kitty sock for Mailing, but it's not worth showing.  Instead, I've got this to show: 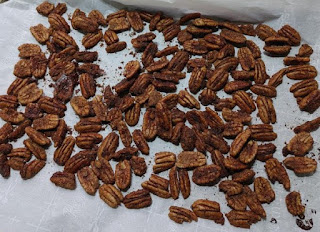 This is what I made yesterday afternoon - Spiced Pecans.  Oh my!  I need/want to get another bag of pecans and make more.  Pecans are not cheap.  The recipe is so simple:

Bring a pot of water to a boil.  Drop in 12 oz of pecans.  When the water comes to a boil again, take off heat and drain the pecans.  Shake off as much water as you can.  Blanching them this way eliminates some of the tannins found in pecan's skins that can be a tad bitter.

Throw the pecans in a bowl where you have combined:

Mix them all around till coated.  Spread on a cookie sheet lined with parchment paper and bake at 300 for about 20-30 minutes, stirring occasionally.

Cool on a rack and then package in an air tight container (I used canning jars).  Delicious!

Next time I would cut back on the cinnamon and maybe increase the cayenne and/or cloves.

I have a recipe for almonds that I got from a steakhouse in FL.  Basically you roast some raw almonds and then toss them in EVOO with fresh rosemary and a bunch of garlic.  Oh my!  These are also really good.  I may need to pick up some raw almonds in addition to the pecans.

Meanwhile, there are some more cookies I'd like to make.  And I found a recipe for an apple nut torte that I made about 30 years ago that is wonderful (especially served with whipped cream flavored with cinnamon).

I guess what I'm trying to say is that I'd better start some kind of exercise program or walking again or something.  If I'm not careful I'll be 500 lbs before the new year!

We are hunkering down for the forecast storm.  They are now saying we should get about a foot of snow Wednesday into Thursday.  We had very wet snow yesterday afternoon that was quite heavy.  I'm hoping the snow tomorrow will be lighter.  It should be because it will be quite a bit colder.  The snowblower is ready and we have plenty of food on hand.  There is knitting, stitching and plenty of reading to keep me occupied (plus, I will be working).

Time to pour another cup of coffee.  I'll try to do a better job and have a TNT update for you next week.