A Thursday Jumble of Things

Last night was another one where I was awake more than asleep.  Hopefully there will be a nap later on.  But first I have a doctor's appointment at 8:40 and a rash of reports to get out.  So...a busy morning.

Yesterday saw our first snow of the season!  So pretty.  It started a little before Noon and lasted for a couple of hours.  No accumulation, but it did stick to tree branches.  Hopefully the very short video below will let you see what it was like.

When Colin & Mailing were over on Sunday, he mentioned seeing an abandoned bird's nest in one of our burning bushes.  Yesterday when I walked down the driveway to get the mail I saw it. 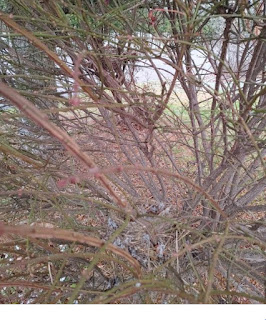 Do you see it?  At the center near the bottom.  There is also the beginning of another one above it and a little to the left.
Finally, I only rarely go on IG, but the other day when I opened it up this appeared! 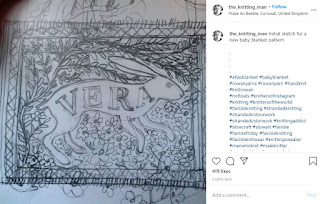 Of course I LOVE it!  I need to save the image - perhaps for stitching or something.
And that's it for me this morning.  I've got to try to knock out at least one report before I get ready to head to the doctor appointment.  Have a great day!