I hope everyone had a nice weekend.  I'm kind of surprised that it's Monday morning already - not sure how that happened.  And, I don't feel as though much was done this weekend, but I guess a bit was accomplished.

Saturday morning I walked the tow path by the canal.  It was a pleasant morning to be out.  After my walk I stopped at Produce Junction for a few things - a couple pounds of Crimini mushrooms (which went into a barley casserole dish last night), some yellow cherry tomatoes (so good!), a couple pounds of jalapeno peppers (which will be candied later today) and several pounds of Persian cucumbers which became pickles.

Sunday morning I walked the trail in Oaks and ended up walking 4 miles in just under 1.25 hours.  Not too bad!!

Laundry was done and the kitchen floor was mopped as well, so chores were completed.

A small amount of knitting was accomplished.  The Hellebore Hitchhiker is now at the point it was when I lost control of it and had to rip it all out. 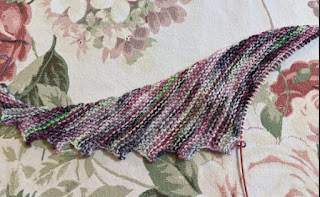 This is such a meditative knit and the pattern is easily memorized.  I just need to pay a little bit of attention and not let my thoughts wander too far!

As of last Friday I had cast on and knit the cuff for my brother's sock.  A bit more has been done on this.  I'm using the Gladys pattern (free on Ravelry).  Just doing the top portion with the Herringbone portion.  The balance of the leg will be plain. 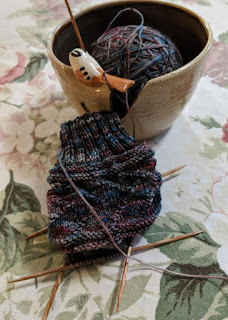 I used the same pattern on a pair of socks for Fletch and they turned out really nice.  Hopefully Phil will like these.

Originally I thought I would go into the office today.  I have stuff to drop off and things to do there, but I can't seem to summon the energy to go in today.  LOL.  This could end up being a problem when we "go back" to work!  I have a conference call at 10 and some other things I can do from home, so the entire day won't be lost.

It doesn't seem possible that we are already halfway through May!  Hope your week goes well.
Posted by Vera at 7:10 AM