A chilly morning here in Eastern PA.  I heard on the radio driving in that folks were already sitting on Broad Street - along the parade route - at 6 a.m. this morning...that means they will be sitting in the cold for over 6 hours before even seeing the parade!  NUTS (personal opinion).  A guy at work told me he passed the Paoli train station at 5:30 this morning and there was an incredibly long line of people waiting for the train.  Cory, who works with me, is driving in with her two young children - she was unable to get train tickets.  There are a lot of people in my office who took the day off to go to the parade.  But for those of us here, there are reminders: 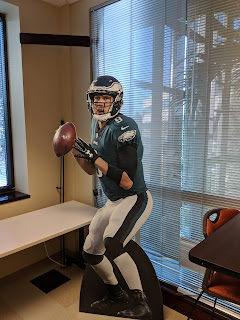 LOL.  this is one corner of our main kitchen,


Meanwhile, it was an easy commute in thanks to so many people taking the day off.  We had really heavy rain yesterday (after the snow and sleet) and this morning there were a number of icy patches on the roads where water had ponded and then froze over night.  I passed one car that had apparently spun around and hit a tree!  Thankful to be safe.


This morning I finally remembered to take a picture of Sigla! 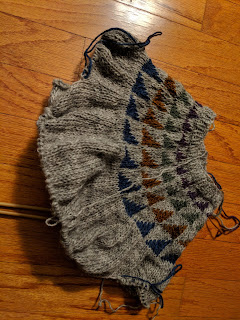 Oh how I am loving this knit.  Sleeve stitches are on yarn and I am knitting down the body - lots of knitting round and round, but it is sort of meditative.  The needles (size 10.5) feel awfully BIG after all the socks I've been knitting, but so far they are not bothering me.  I was able to knit about 2 rows this a.m. with my coffee, but I left it at home.  Instead I brought the fingerless mitts to work on if I can manage to take some time at lunch which might just happen - my one boss is flying to Phoenix this morning and my other boss is playing in a golf tournament, so it should be smooth sailing for me.


Bill (boss) just called me from the airport - said traffic going in to the airport was worse than usual - tons of limos, etc. on the road taking folks into center city for the parade.


Hope you are all doing well as we inch towards the weekend!
Posted by Vera at 8:39 AM