Not a holiday for me, unfortunately, but on the bright side, traffic was very light driving in this morning.  The weekend was good, but Monday seems to have come rather quickly.


Friday night I was exhausted and ended up going to bed early and slept 10 hours!  It was wonderful.  Saturday morning was taken up with a visit to our tax person.  We are still missing some info (didn't it used to be that all paperwork for taxes had to come to you by the end of January?  Apparently that is no longer the case.).


We ended up going out Saturday afternoon to grocery shop due to the weather forecast.  And, sure enough, right around 4:30 p.m. it started snowing.  Very wet and heavy snow, but it was beautiful and pretty mild out.  This is what it looked like around 10 p.m. Saturday night: 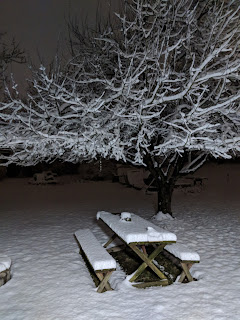 I love when snow blankets the branches of trees.  Sunday was mild and most of the snow is now gone.  Fletch did walk around 11 p.m. Saturday and said it was very ethereal looking - lots of fog and beautiful snow (I was sleeping again - lol).


Meanwhile, it was the Chinese New Year (Year of the Dog).  Colin and Mailing went into the city Friday night to have dinner with friends and spend the night.  They planned to go to the parade, but it started much later than planned so they only saw a tiny bit on their way to dim sum:

Finally, there was some knitting over the weekend - Sleeve #1 is complete: 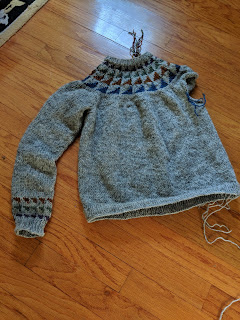 I'm thrilled - the sleeve is the perfect length (and I won't be running out of yarn!!).  I've decided to weave in all the ends from the colorwork in both the yoke and the first sleeve before I cast on for Sleeve #2.  There are So Many ends!!  I really don't want to finish the sweater and be ready to block but have 50 million ends to deal with, so I'll get the majority of them done now.  The knitting went relatively fast, but was a pain with the body of the sweater twisting around in my lap.  And, using size 9 DP needles for the cuff was hard on my hands.  Luckily it's not a ton of knitting.  Hoping to get the ends woven in tonight after yoga and then I can start the second sleeve tomorrow.


Now I've got to get to work.  I expect it to be an easy day and am hoping to get out of here early - maybe with enough time to weave ends before going to yoga!


How was your weekend?