Monday and (finally) Some Sunshine

Wow!  The sun is finally out...it was such a dreary weekend here...which prompted some heavy duty cleaning.

Saturday I put away summer clothes and took out the fall/winter sweaters, heavier pants, etc.  And, I discovered something I had knit many moons ago (probably at least 10 years).  This was one of those periods where I thought:  I want to knit again.  I think this is the only thing I knit (other than a belt that looked ridiculous and stretched out the first time I used it). 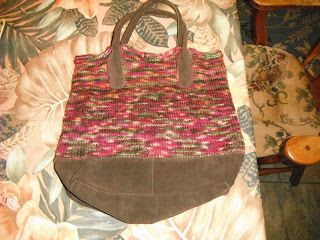 This is the first thing I ever knit in the round.  I remember having to re-do my start at least 5 times because I kept twisting the stitches.  I can’t remember the brand of yarn, but I bought it at a (now closed) store in Malvern, PA where they also sold the suede handles and the suede base for the purse.  I’ve never used it…keys, pencils, etc. would poke right through this.  But, I’ve brought it out of hiding and I think I will make a liner for it so that I can make use of it.

In between my cleaning frenzy I managed to cast on the plain old vanilla socks I will take on my trip come Wednesday.  This yarn is gorgeous – Madeline Tosh 100% merino and the colorway is Mansfield’s Garden Party.  Many thanks to Ellen, as I won this yarn over a year ago in a give-away that she had.  At that time I had just attempted to make socks and the result was rather pitiful.  I’ve been saving this yarn until I could actually knit something I would wear. 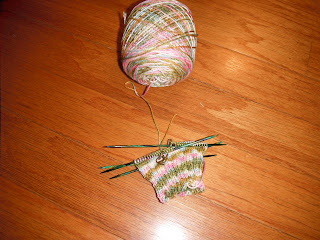 I put in about another 15 rows on the shawl, but not enough for pictures (yet).  And I managed to pack for my trip!  I’m the one who is always packing at midnight the day before I leave.  But I wanted to make sure everything would fit (gift bags for the girls and enough clothes for any type of weather for 5 days).  Now I have the luxury of time to re-do all that packing…probably tonight after yoga class.  My flight on Wednesday is not till 6 p.m., but I’ve decided not to work that day.  Instead I’ll try to get my hair cut and then knit and relax until my ride to the airport arrives.