We had a gorgeous weekend for camping!  We only went a little bit west of us – just past Carlisle (which is just west of Harrisburg for those not from the area).  The drive out was uneventful (I always over-worry pulling the camper) and we arrived at the campground around 4 p.m.  This was the sign that greeted us upon arriving: 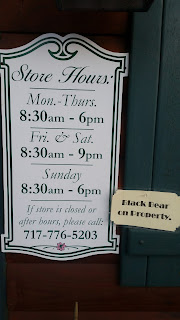 And it’s for real – there has been a black bear on the property and plenty of evidence (scat) of one around.  I was hoping for a sighting, but no bears this time around.


After a quick dinner we settled in around the campfire as the night temps cooled down.  Saturday morning was a little chilly.  I wore a fleece jacket, my Baable hat and fingerless gloves while cooking our breakfast (raspberry pancakes & sausage): 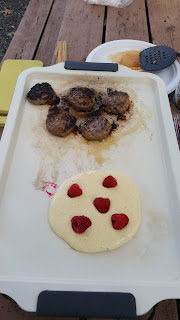 Late morning we headed up to Colonel Denning State Park.  We decided to hike the Flat Rock Trail which is billed as being steep. 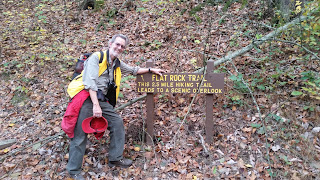 That is Fletch after the hike…YIKES!  It is 2.5 miles up – pretty much at a 45 degree angle for at least 2 miles.  A rocky trail with plenty of leaf cover made for slow going (along with the steep incline).  The view from the top of the Cumberland Valley is gorgeous.  Unfortunately my pictures didn’t turn out – it had started to haze up a bit by the time we reached the top, but there are some pretty pictures on the link above.  Going down was just as hard (tough on the knees and ankles!!).  That night we grilled steaks over the fire and a mesh basket full of peppers, onions, mushrooms and some potatoes.  No pictures – we were too hungry after our hike and ate pretty fast.  Friends joined us to sit around a campfire and here’s a shot of the sunset that night.  The colors actually became very vibrant and it was just gorgeous. 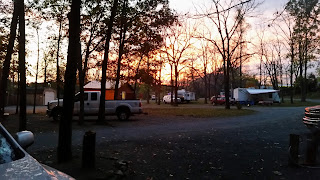 Sunday was pretty warm.  Cooking breakfast outside was easy and fun.  Yay for bacon & eggs outside. 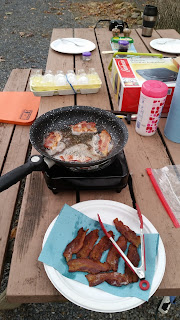 Then it was time to clean up, pack up and hit the road.  It was 80 degrees on our patio when we got home!  This is late October?  But, by 5 p.m. a strong thunderstorm rolled in and the temps dropped (glad we got home before that!!).


Yarn for my Sigla sweater arrived while we were away, but I don’t think I’ll have time to even cast on till later in the week.  I'll at least get a picture of the yarn soon - it is gorgeous!!
Posted by Vera at 1:02 PM