How are you this Tuesday?  I finally got out and walked yesterday.  It has been a long time.  You know, the weather has been our famous Philly HHH (hazy, hot & humid) weather which is not (for me) conducive to walking.  Then, of course, I was on an antibiotic for three weeks due to Lyme Disease and was not supposed to be in the sun.  So, it has been weeks since I walked and boy was it nice to get out and it felt great to walk.  I drove over to the park in Oaks and did a 3 miles stretch (1.5 miles up and back).  The path is paved, but it was very muddy in places and I noticed a lot of debris along the side - branches, twigs, etc.  Where the Perkiomen Creek meets up and joins the Schuylkill River I saw this: 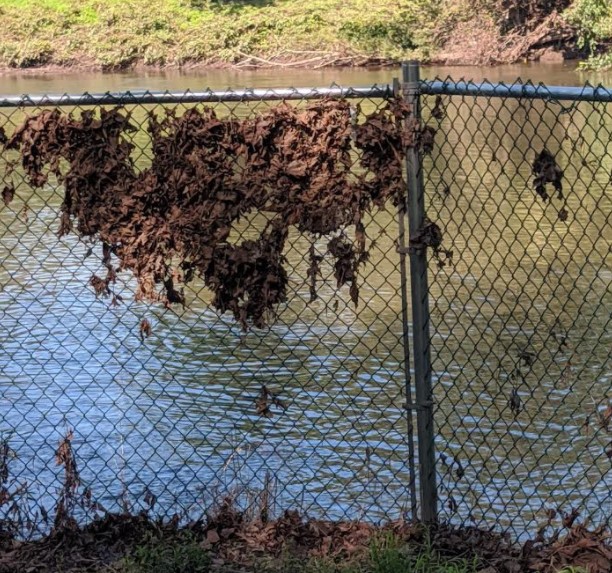 Not so pretty, but it shows how high the water must have come up in last week's storm.  I did not see any signs of the old heron nests I had found some months back - I believe they were destroyed or washed away in the storm.  I'm planning to walk again today - either back at Oaks (going a little further) or at the canal path.

Meanwhile it is Tuesday which means it is time for Tiny Needle Tuesday or TNT.  Here's where I am on the "Permit Me Not To Stray" sampler by Heartstring Samplery: 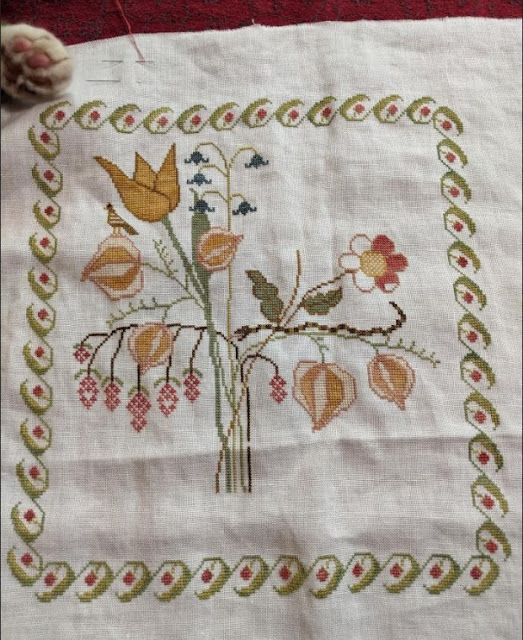 More flowers and the Evil Serpent has been introduced!  Still a way to go on this one, but I'm pleased with it so far and like the progress I've made.  It's a fun stitch.  (Note the helper's paw in the upper left corner...Tyg keeps thinking he would like to learn to stitch...or at least play with the thread...)

I didn't get any more done on it last night because I baked two pies instead!  We had some blueberries and apricots in the frig that needed to be used sooner rather than later, so I combined those with some cut up rhubarb I had in the freezer (and a bunch of sugar).  I made two small pies and will take one to Colin & Mailing tonight (we're heading over to their place for dinner tonight).  I didn't follow a recipe - just sort of eyeballed things.  Fletch had a piece of one of the pies last night and pronounced it delicious.  Yay!  A win!

It suddenly dawned on me over the weekend that Colin & Mailing's wedding is less than two months away!  And I have no idea what I'm going to wear!  It is a back yard wedding in October and is "garden attire."  I do have two dresses that could possibly work that I have never worn.  Both are sleeveless, but  could work with a wrap.  Sunday I drove over to Marshall's to look around.  I often have very good luck there finding things.  And, I did find a cute pair of sandals and a cute pair of pants (score Tahari pants marked down to $10!!), but no dress.  The interesting thing to me is that their dressing rooms are closed - no trying on clothes.  However, clothes are returnable - so you can go home and try them on and then bring them back and return them.  It doesn't really make sense to me why their dressing rooms are closed, but whatever.  The pants fit (and the sandals which I did try on in the store).  Maybe the next time I head to the office I wlil check out TJMaxx.

Well, time to pour another cup of coffee and get started on the work day.  Hope your week is going well.