The sun is (finally) out.  What a soggy weekend we had - lots of rain and then high winds.

So....my weekend did not start out very well.  After dinner on Friday night I started baking.  I got one batch of cookies done and then my oven quit!  It's electric and the heating element fried itself.  This happened once before - back in 2010.  That first time the fire department arrived!  Luckily that did not happen this time, but until we can get someone out to repair it, my baking is on hold.

Saturday was nice despite the weather.  We went over to Colin & Mailing's for dinner to celebrate Colin's birthday.  Here are the kitties checking out the gifts. 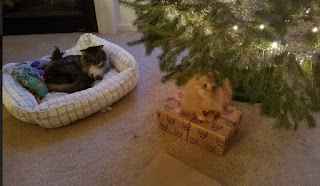 Marcel sat on the one gift for quite some time.  Talbot didn't really seem ALL that interested - lol.

Here is their mantle.  The stocking on the right is one that my 2nd Mom (Leslie's Mom) made (needlepoint) for Colin when he was born - so it is 29 years old!!  The thing that looks like a stick on the left is a bow that my uncle carved - probably in the 30's or 40's. 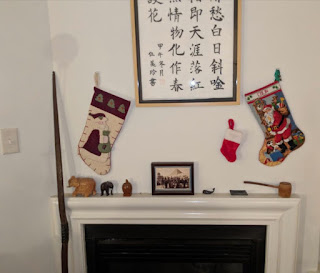 Dinner was delicious.  Mailing made Korean fried chicken - two varieties one was hot and the other was a butter-honey.  OMG, so good.  To go with there were plenty of things I had never had!!  Lotus root,, burdock, sesame leaves, and then there were pickled cucumbers, soy beans and anchovies.  Dessert was a pistachio cake - Yum!!  Here's a shot as stuff was being put on the table. 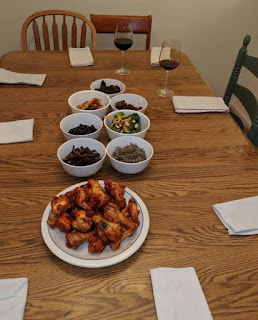 Sunday was pretty much a lazy day.  I did an errand or two and then decided to knit a tiny cat.  What a fiddly mess that was!  I will not be doing this again.  I used alpaca yarn which kept splitting and fraying.  Anyway, my version ended up looking like a cat that has been in a fight.  The tail is supposed to be knit, but I had had enough at that point, so I just braided some yarn and tacked it on.  A cute idea, but way too fiddly for moi. 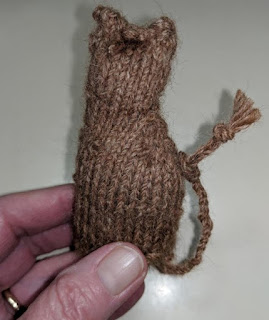 Finally, some of you asked to see our tree.  Here is a shot I took this morning as I sat with my coffee enjoying the lights. 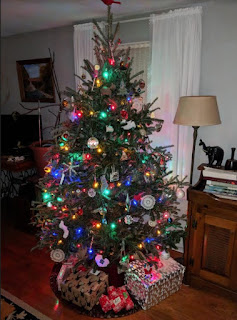 I cut off the top by accident, but we always put a red cardinal at the top of our tree.

Hoping this week will be easy.  Today is probably busy, but the rest of the week should be a breeze (fingers crossed).  Hope your week goes well.
Posted by Vera at 8:20 AM