Yesterday's work Christmas luncheon was so very, very nice.  Davio's has excellent food and there was so much of it!  There were also a bunch of raffles (I did not win anything) with prizes like:  KitchenAid Mixer, Michael Kors bag, Coach bag, Yetti Cooler, Gift Cards, etc., etc.  And there was an ugly sweater contest too.  It took awhile to get through everything, but things finally wrapped up around 2:45 p.m.  We all received the 2018 Swarvoski ornament - we have been receiving these since 2002!!  It was difficult to get a picture of it, but here you go: 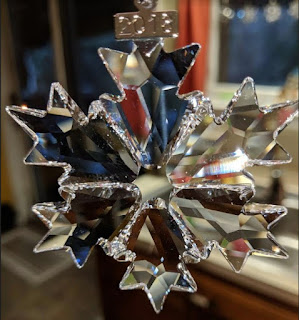 This year's design is simple, but so pretty.  We have the ornaments hanging in our kitchen windows where they catch the sun.

Last night I made two kinds of cookies.  I forget the name of the first one, but they are small, round cookies flavored with ginger, cinnamon, nutmeg and cloves.  Love them!  The 2nd kind was a disaster - lol.  Before dinner I mixed up dough for some ginger shortbread cookies.  First I read the recipe incorrectly (I can't see small print) and thought it said 1/2 Cup of butter when in reality it said 1/2 pound of butter.  A rather large difference.  But, I caught that before I finished mixing the dough.  I rolled it into logs as the directions called for, wrapped in plastic wrap and put them in the fridge for several hours.  Took them out, sliced and baked.  They melted into a mess and they tasted horrible.  The whole batch (with 1/2 Cup of butter) went into the trash can.  The recipe (new to me) is also in the trash!

Decorations this year are on the minimal side.  The buffet is done: 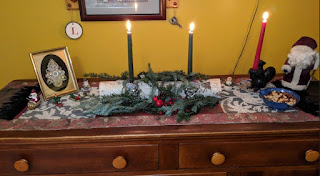 The birch log that Fletch drilled holes in for candles, a little greenery, my squirrel candle holder (love him - got him years ago at Restoration Hardware) and my most favorite - the framed tree that Fletcher's Mom made out of costume jewelry.  So sparkly and pretty! 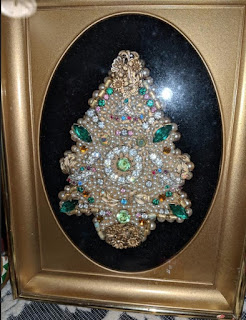 Not a great picture, but the best I could do last night.

I also write Christmas cards last night!  I know - amazing!!  The plan had been to finish wrapping gifts to ship, but since I was holed up in the kitchen baking, I decided to sit at the table and write some cards.

The tree is in the house - Fletch will put lights on it today and we will decorate it tonight when Colin comes over for dinner.  We are almost ready for Christmas!!

Well, I'd best get back to work.  It's Thursday and I have a bunch of financial reports to run.  Hope everyone's week is going well.  It's almost Friday!!
Posted by Vera at 8:29 AM