How Can It Be Monday Already???


I'm not sure how it happened, but I'm already back at my desk at work...and I feel as though I just left.  I know there was a weekend and I had fun, it's just hard to believe that it has already flown by...as has July (almost).


Last week was crazy/busy at work with Lame Duck antics and Successor to Lame Duck demanding a ton of attention. Oy!  Plus working with the CEO and my other boss as well.  BUT, I did escape by 12:30 on Friday and had a lovely afternoon.


Saturday Dee arrived at my house and we took off for a fun day.  First we walked one of my favorite trails - what I call the Canal Trail which is part of the Schuylkill River trail.  The temps were mild, but it was very humid.  The trail was busy with folks jogging, biking, walking.  There were even some out on the canal kayaking.  Lots of flowers blooming and a lot of turtles in the water.


After that we headed into Phoenixville for a bit of shopping (we behaved ourselves) and then hit the farmers' market.  Next stop was lunch - I can't remember the name of the place we ate, but my Firecracker Burger (buffalo dressing and jalapenos) was delicious!  Next stop was Purls of Wisdom, the local yarn shop in Kimberton, where this skein jumped into my hands: 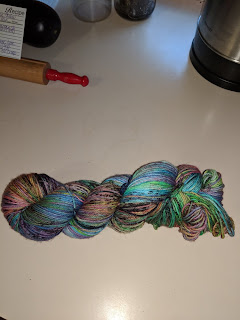 Madeline Tosh sock yarn and the colorway is Electric Rainbow.  I love it.  We ended up the afternoon sitting in my backyard knitting.  Dee just missed getting smacked on the head by a falling apple!  Dee got a glance at Froggy (BTW, there are now 2 frogs!!!) and Tyg kept his distance from her.


All in all, such an enjoyable Saturday and just what I needed.


Sunday was the usual laundry and grocery shopping day.  Fletch and I did head over to Otts Nursery in Schwenksville late in the afternoon.  They do not have a web site, but this is a fabulous nursery.  Tons and tons and tons of stuff.  We bought some plants for the garden (will get a picture after Fletch plants them) and I finally got my little succulent pot: 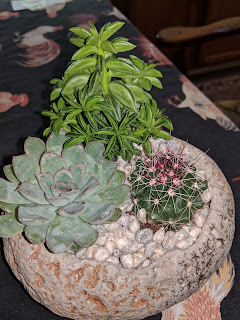 I was going to buy a container and some plants, but it was much cheaper to get one already made.

Because the humidity dropped some, I also soaked my Winter Sea Shawl and that is now blocking.  I was tempted to do that outside, but then remembered all the bugs and slugs (yuck) we have, not to mention birds flying overhead.....Hopefully it will dry soon.

I managed to knit very little this weekend.  perhaps another inch on my sweater and I started the heel flap on the dragonfly sock but didn't get too far.  I did finish The Essex Serpent and enjoyed it a lot.  I'm now reading White Houses by Amy Bloom.  I've only read about 15% (according to my Kindle), but so far it's good.

Meanwhile, it's another busy work week.  I'm finalizing plans (contract, rooming list, etc.) for a "meeting" on Hilton Head the last week of August.  This will be the Lame Duck's last get-together with his team.  And, there's a ton of other things going on too.

Wishing you all a great week!