Trying to Catch Up!!


I really had no intention of being absent for so long...I thought I would post from home, but honestly it was nice to NOT be on a computer and early on the heat and humidity were just so oppressive.  So, I will try not to make this too long, but want to share what's been going on in my world.


Last Tuesday, July 3rd, Colin & Mailing came for dinner.  We grilled hot dogs and had baked beans and a wonderful coleslaw that Colin had made.  So colorful!! 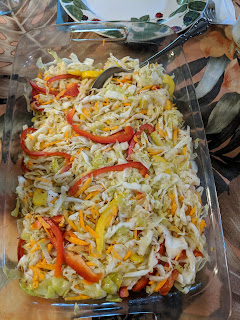 But the two best things were the Cherry Pie made by Colin - he had just taken it out of the oven before they drove over:

And the drinks he made:  Mojitos with a bit of a twist.  A few days earlier Mailing had poached rhubarb in lychee juice and St. Germaine.  They saved the poaching liquid and we used that in the mojitos in place of sugar.  Fabulous!!!  I don't have measurements, but you muddle a bunch of mint, the poaching liquid and the juice of 1 or two limes...add a bunch of rum and ice and top with club soda.  Delicious!!  Sorry I did not get a picture of those!


After dinner Colin & Mailing drove over to Col's work where he has a garden plot and they harvested his garlic.  While they were gone, Fletch harvested ours.  Here's a shot of it all:

We have a bunch of different varieties:  Turkish, German, Vietnamese and a couple others I can't remember.  Most of the heads are good size and we have it hanging up and drying on our patio.  I have used one head already though and it is wonderful!!


The 4th was nothing special for us.  It was very hot and muggy.  The humidity was through the roof!  We did have a strong thunderstorm that evening which didn't stop the local fireworks from being set off.  Usually we can see them from our house, but with the storm, we couldn't see anything.


I had mentioned that I was being sorely tempted to do some sewing.  Naturally I picked the hottest and stickiest day to do that - Thursday!  But, I persevered and sewed a top for myself: 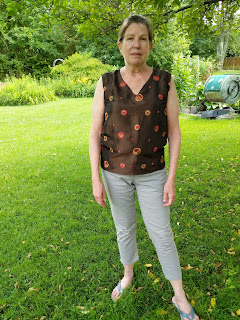 I think my expression says it all...I was so miserable and sweaty - no makeup, hair pulled up to be off my neck - lol.  As soon as Fletch took this picture I hopped in the shower to cool off.  I'm happy with the top, but won't be wearing it much (or at all) until cooler weather.  The fabric is some that I bought in NC decades ago and it is some kind of rayon that does not breath at all.  It is very warm.  But, I think in the fall it will be cute with a sweater or light jacket.  I love the fabric since it is embroidered, but I just can't stand to wear it right now - lol.  A couple of notes:  I didn't bother with the darts which were not in the right place on the pattern for moi and anyway, I can't remember the last time I bought any top that has darts in it!  And I skipped the interfacing on the facings around the neck and arms.  The fabric was stiff enough that I didn't want to add the bulk.  It all worked out!! 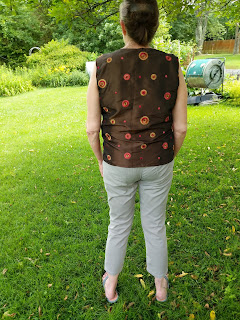 The rest of the time off:  Friday it rained most of the day.  I did some errands and grocery shopping.  Saturday we woke up to the most gorgeous day!  Sunny with temps in the upper 70's and no humidity!!  Our friends Carol and Gregg drove up from MD for a cookout and to celebrate Gregg's birthday.  We had grilled steak kabobs, grilled shrimp, grilled marinated mushrooms and peppers and I roasted Brussels Sprouts, cherry tomatoes and red onions.  We did two different marinades for the shrimp.  Half were done in an herb butter with Sriracha added and half were marinated in a Caribbean style marinade:  rum, butter, cinnamon, allspice, vanilla, garlic.  I wasn't sure how they would taste, but they were really, really good.  Dessert was home-made strawberry shortcake.  It was cool enough that we had a fire in the pit after dinner and just sat around talking, listening to music and having beverages.  It was such a fun night...I wish they lived closer than they do.


My Winter Sea shawl would have been finished this weekend, but I decided to do one more repeat of the 16 row pattern.  Oy!  Of course I found a mistake and had to tink back 3 rows yesterday.  But I am back on track and half of the last repeat is finished.  I **should** be able to finish the shawl this week.


On the reading front I finished This Book which I enjoyed (though I was tired of it by the last third or so) and am about a third of the way through Enchantress of Numbers which is interesting, but a bit of a slow read.


The announcement of the Lame Duck's replacement will be coming out today.  The "winner" as it were was not my choice (my choice wasn't even in the running - lol).  The funniest comment I heard was a week or so ago.  The Lame Duck's region is the South:  Virginia down through Florida and over to Mississippi.  What I heard was:  "If Kevin is chosen, the South WILL bear arms again."  Kevin is the one who was chosen.  It is going to be interesting to see what the fallout of this will be.  Of course, I will be working closely with Kevin and I am fine with that.  He has a HUGE ego and tends to strut around at times...but I can deal with that.


On that note, I'd best get down to work.  I did read some blogs on my phone, but commenting is a PITA on the phone...will try to catch up with you all today and tomorrow.  Wishing you all a wonderful week!