Hi There and Good Morning!

More computer difficulties, but finally on again.  Sometimes I simply hate technology - lol.  Seems like I'd be lost without it...feels sometimes like I'm lost with it.

Anywho, we did not have a white Christmas, but this is what I woke up to this a.m. 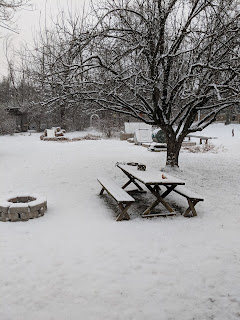 Looking out from the back patio:  picnic table and fire pit, garden to the back (green round thing is the composter and behind that two "greenhouse" covers over some raised beds (collards growing!!), and our woods behind that.

The birds were feeding constantly. 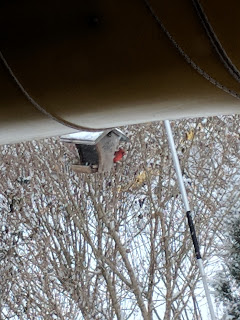 That's Fletch's kayak at the top - hanging from our patio roof.  The pole in the picture keeps the clothesline (which the feeder is on) propped up high enough that Tyg can't jump up (lesson learned when one day he jumped from the ground into/onto the feeder and got a poor unsuspecting bird).  This morning I actually watched Tyg run after a low flying flicker!  One of the big red-headed woodpeckers (which for some reason are called red belly woodpeckers).

So, the roads are a mess.  Fletch heard earlier that there were already multiple (like 9-10) separate multi-car accidents on the Schuylkill Expressway.  The snow is so light that Fletch could use the leaf blower to get the cars clean, but he said it is very slippery out.

We have a party to go to tonight...luckily it is just across the street.  We may be the only ones to show up - LOL.

Yesterday we got the grocery shopping done...and a run to the liquor store.  I think we are set for some time.  No need to venture out.

On the knitting front I managed to get the first fingerless mitt finished! 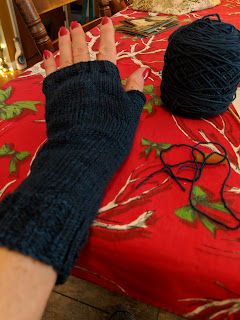 I love it!  Now I just need to cast on the 2nd and get knitting.

I've also wound yarn for Colin's socks.  He picked out yarn while he was here Thursday night.  And I need to look at patterns.  He said just plain was fine unless I wanted to spice it up a bit.  So many of the patterns I have are lacey...not what he would like.  I've made him a pair using the Petty Harbor pattern, so want to do something else.  I can search this afternoon.

When Damon, Fletcher's brother, was up at Thanksgiving he brought a HUGE box of stuff from home which contained tons of things their Mom had saved.  Correspondence (letters and postcards from us), telegrams (!), birth announcements, report cards and the like.  And there were pictures.  Here is a blast from the past. 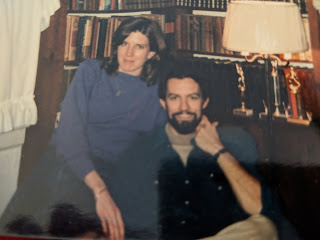 No date on the picture, but I'm guessing it's from the early 80's - post marriage but pre-Colin.  This was taken in Norfolk, VA at Fletcher's Mom's house.