Good Morning From the Grey Suburbs of Philadelphia!


Yes, we are having a bit of a drizzle this a.m.  And we had some rain last night, but not as bad as had been forecast (though Mailing had hail on her way home from work!!).  And the temps did not drop as much as promised.  Still muggy around these parts.


I did manage to re-cast-on Nutkin Monday (after ripping it all out Sunday), but only got 5 rows of ribbing done.  Last night after dinner I settled in for some knit time. 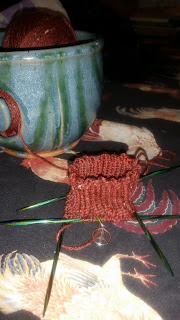 That's 15 rows of ribbing (much, much better than the folded over cuff).  And I managed to knit another 12 rows after that, so one pattern repeat done (10 rows) and the next started.  I'm happy to say that it is working out well doing the first stitch on each needle as a knit stitch rather than a purl.  It doesn't impact the main pattern and looks fine.  So, Nutkin is reborn as my own version.  I most likely won't get to work on this again until the weekend.


Reading continues.  "The Readers of Broken Wheel Recommend" is not what I expected and a bit of a slog for me, but I'm about three-quarters of the way through it, so will push on.


Mid-week already!  I'm heading to yoga tonight since there was no class on Monday and I believe Colin will be over for dinner tomorrow.


Hope everyone is settling back into routine after the long Labor Day weekend!