Poor Talbot!  He is one of Colin & Mailing's cats -- they rescued two while they were living in Pittsburgh.  Did you read Val's Blog yesterday about Cecil?  Well, sounds like Talbot has been going through the same thing.


The last time he ate any food was Friday and he started vomiting (bile) over the weekend.  Mailing took him to the vet Monday morning.  They did an ultrasound and saw a "foreign object" in his intestine - blocking it all.  They performed surgery, but didn't find the object!  (He might have ended up passing it by that point, I don't have all the details).  They were doing a biopsy on his intestine to make sure there isn't something else going on.  He was resting on a heating pad Monday night.


He is still in the hospital!  They have been giving him an IV drip for fluids (very dehydrated) and want to keep him until he eats (and keeps down) food.  Col and Mailing visited him last night and according to Colin, Talbot's mood is much improved despite having to wear a cone.  Just make things even more shameful, he had to have his belly shaved.


Marcel, Colin & Mailing's other cat, is missing his big brother.  Hoping Talbot can come home today.  Please keep your fingers crossed (and paws) for both Talbot and Cecil that they come through ok. 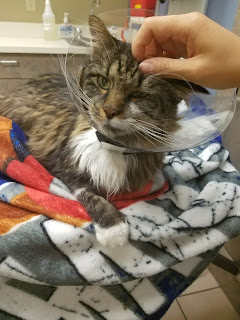 Email ThisBlogThis!Share to TwitterShare to FacebookShare to Pinterest
Labels: Talbot